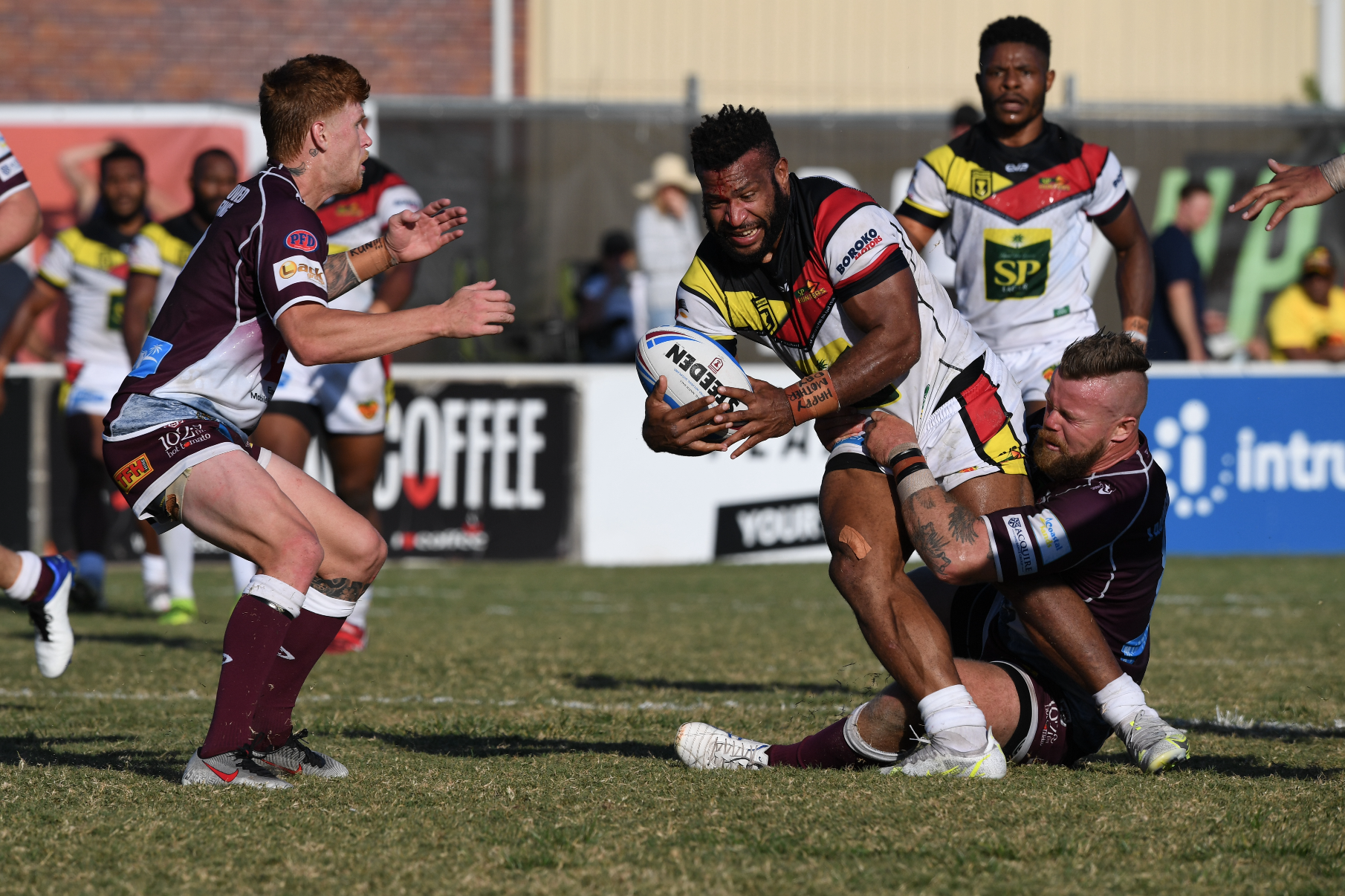 The SP PNG Hunters will welcome a week off to rest their injured leaders after falling short to Burleigh Bears in a classic Intrust Super Cup clash at Pizzey Park today.

The Bears lasted for a 25-18 win before a huge Anzac Day crowd, holding on to the Kokoda Cup for the third consecutive year.

The Bears led throughout the match but the Hunters were always a chance to fight back, ignited by fullback Terry Wapi who charged down a kick and scored in the 69th minute.

That reduced the margin to three points and the Hunters fans were hoping their team could finish over the top of a Bears squad that played without any interchange players in the second half due to injury.

But these Kokoda Cup clashes have become known for their unpredictability.

Just when the Hunters looked set to claw past the defending champions, an early kick by Bears five-eighth Tanah Boyd sparked a turnover that led to a 79th minute try to Beau Fermor – the third try for the Gold Coast Titans-contracted player.

That closed the door on the Hunters’ hopes of stealing back the Kokoda Cup for the first time since 2017.

Alu was injured early in the second half today and will require scans on his hand while Puara and Kapinias will return for the Round 6 clash with Brisbane Tigers at Bycroft Oval on May 9.

“That was a real physical challenge today but full credit to Burleigh because they were outstanding and played smart football,” Church said.

“They came out with a lot of energy early in the second half and they kept competing. We probably tried to go around them too much rather than concentrating on what works best for us.

“Any loss is a learning experience and that’s no different for the players or the coaching staff – we’ll all take something out of this game. We’ll have a weekend off next week and get ready to go again.”

The Bears opened the scoring in the 11th minute through Fermor down the left side before Kumuls prop and Bears skipper Luke Page crashed over in the 18th minute to push his team ahead 10-0.

Hunters centre Jokadi Bire flashed his footwork and beat two Bears defenders in a strong individual try in the 32nd minute that enabled PNG to move with confidence towards halftime. But Burleigh livewire Guy Hamilton snuck a field goal in the dying seconds of the first half, making the score 11-4 and creating a margin that became handy as the game wore on. Both teams were a combined three for nine on conversion attempts today.

Norman Brown scored the first points of the second half when he stormed down the touchline but Burleigh hit back with tries in the 56th and 59th minute which proved crucial. Api Noeme-Matenga scored the second of those tries which forced the Hunters into a sprint to reel in a 21-8 deficit with 20 minutes remaining.

The game was preceded by a moving ceremony featuring national anthems and the Last Post in recognition of Anzac Day and its meaning for the Kokoda Cup – which is contested between the Hunters and Bears each year in late April.