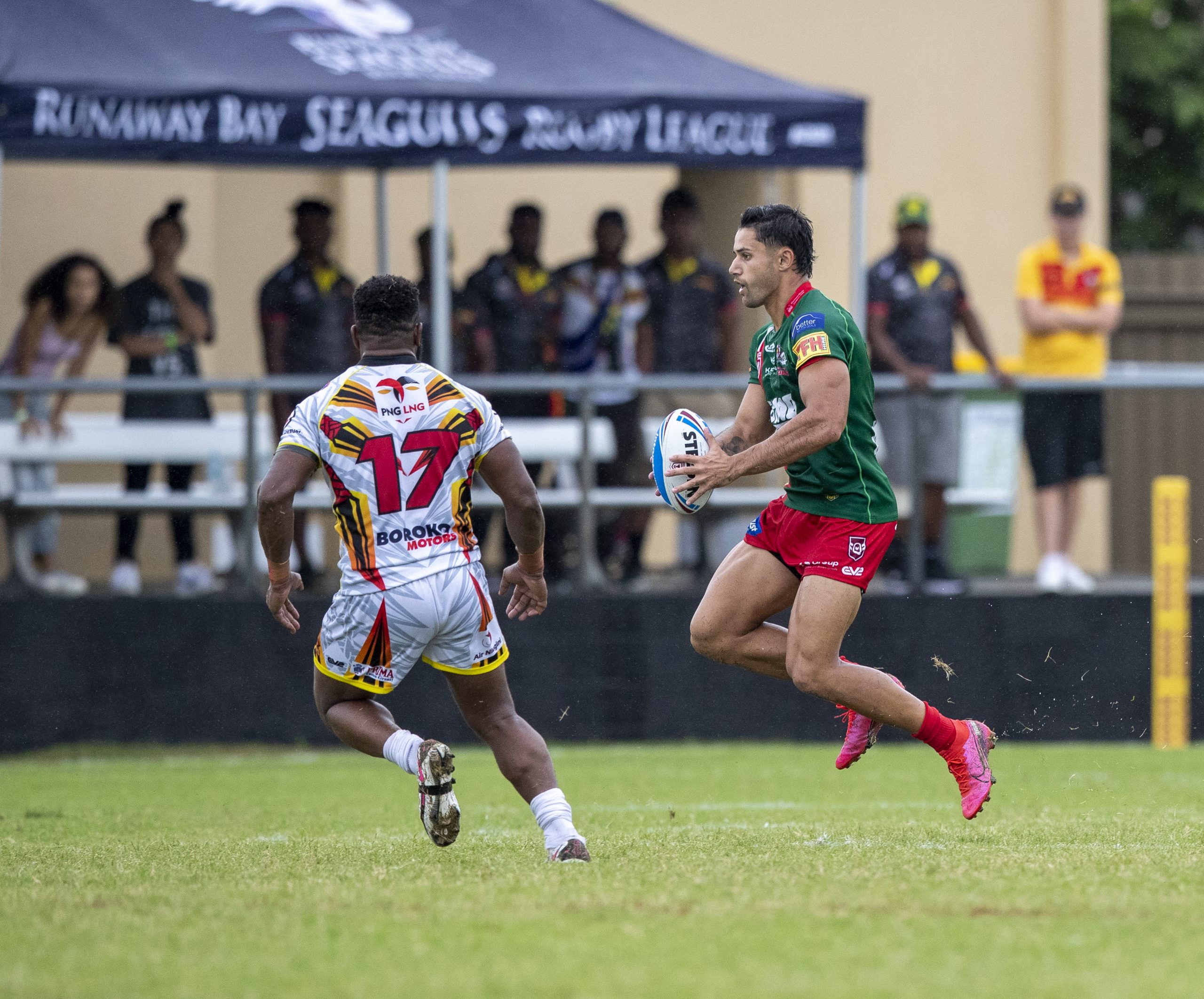 PNG Hunters coach Matt Church said the best was yet to come from his team after they fell just short of a famous win in the opening Intrust Super Cup clash with Wynnum Manly Seagulls.

The Seagulls survived 20-18 but only after withstanding a storming comeback from the Hunters, who trailed by 12 points at halftime at Bycroft Oval at Runaway Bay.

This wasn’t the finish that tipsters expected as Wynnum Manly, featuring several Brisbane Broncos squad members, did not score a try for the last 57 minutes.

Late Grand Chief Sir Michael Somare, who was honoured with one minute’s silence before the match, would have been proud of the way the Hunters surged back into the match.

The Hunters had the most difficult preparation in this year’s competition – a combined 31 days in COVID-19 quarantine while they moved from PNG to Queensland, which meant that they couldn’t play a trial match under the new Cup rules.

While the Hunters waited out their quarantine, the Seagulls drew with an understrength Broncos during a full schedule of trial matches.

But the Seagulls were taking deep breaths in the second half as the Hunters rattled home in the rain.

The flashing feet of fullback Terry Wapi sparked a try in the 50th minute before hooker Wartovo Puara dived over for a try in the 72nd minute to bring the Hunters within two points.

“I told our boys after we came out of isolation that I couldn’t have been prouder of them for the way they had handled it but that’s been surpassed by their effort today,” Church said.

“We knew that we weren’t going to be the finished product in the first game and we know that we have improvement in us so it was very positive to see that fight.

“I told my coaching staff with 10 minutes to go that, regardless of the final result, we were extremely proud of what they had done.”

The Hunters showcased all that league fans love about the team including bone-rattling defence in the opening minutes that shook Seagulls forwards Matiu Love-Henry and Max Elliott.

And their attacking flair caused the Seagulls to scramble in defence with two intercepts in the 68th and 69th minutes that propelled the Hunters downfield.

But the most decisive period in the match came between the ninth and 23rd minutes when the Seagulls scored three unanswered tries to lead 16-0 lead before the rain began.

Luke Bateman and Jesse Arthars – experienced NRL players – scored two of the tries after centre Junior Pauga had combined with Broncos back Richie Kennar for the first try.

Penalty goals either side of halftime by five-eighth Jack Campagnolo were vital for the Seagulls as both teams finished with three tries.

The Hunters posted their first try for the season when debutant centre Jokade Bire crashed over in the 28th minute.

“We said at halftime that we knew we could get back into this game if we could kick well and show effort in defence,” Church said.

“That would help us to build up pressure against them and that’s what we did.”

Bateman, who played 71 NRL matches for Canberra Raiders, said the Seagulls were made to fight. Captain Sam Scarlett was a late withdrawal for the Seagulls.

“It was tough. They really got stuck into us,” Bateman said.

“It was brutal at times.”