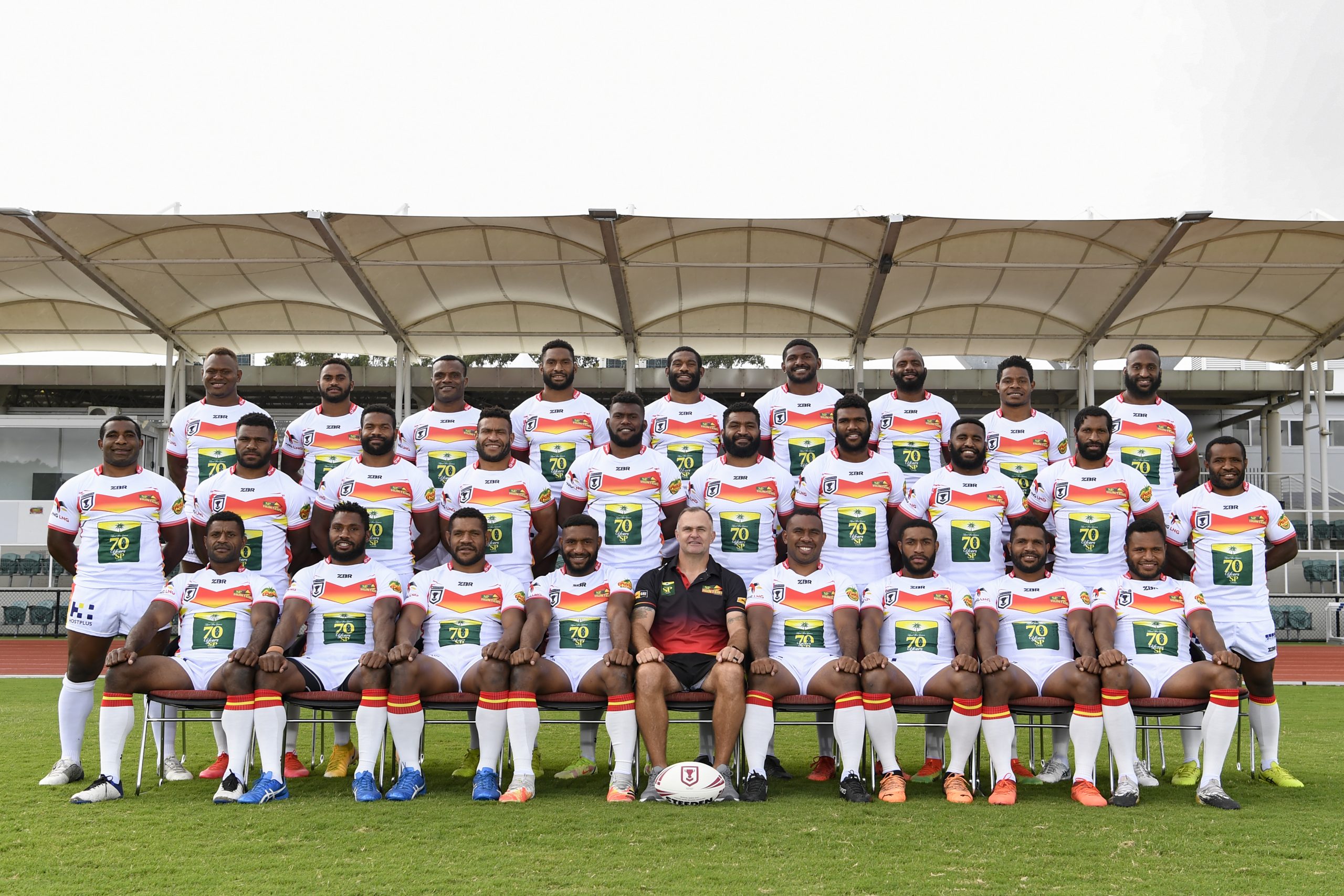 By Oscar PannifexNovember 9, 2022No Comments

As the year draws to a close, we’re taking a look back at the SP PNG Hunters 2022 Hostplus Cup campaign. Read along for a recap of the season by numbers, highlight moments, standout & breakout players and a look ahead towards 2023.

Season by the numbers

Final position on the ladder:

Reflecting on The Hunt

Success shouldn’t be measured in the wins and losses column when considering the SP PNG Hunters’ 2022 Hostplus Cup campaign.

A calculated decision to select a young playing squad with an eye to the future saw the Hunters debut thirteen players this year, following another eleven who debuted in 2021. Growing pains can always be expecting with a roster overhaul like this, particularly when key senior players Wartovo Puara, Ila Alu and Terry Wapi were unavailable at different points throughout this season.

There is evidence that the club is moving in the right direction, though.

With Alu and Puara back on the park for the back end of the season, the Hunters recorded an encouraging five wins and one draw from their last 10 games including big wins over competition heavyweights Burleigh, Wynnum-Manly and Brisbane. These results proved that with a first-choice squad and some time to build combinations, the club was on an upwards trajectory.

Playing out of Port Moresby next season will be a huge boost for the club in 2023 and with a little more luck, the Hunters will be well placed to challenge for a finals berth in the Hostplus Cup competition again next year.

After a breakout debut season in 2021, Sylvester well and truly kicked on this year to become one of the Hunters most consistent and reliable performers in 2022.

One of the first picked in the forward pack each week, Sylvester led from the front with his powerful carries and bruising defence, scoring three tries and tackling with an 86.3% efficiency from 16 games this year.

Sylvester’s work rate and conditioning is up there with some of the best forwards in the competition and still at just 22 years old, Sylvester has marked himself as a genuine player of the future. His rapid development has not gone unnoticed, with Sylvester earning himself representative honours with the PNG Kumuls in this year’s World Cup.

At 30 years of age and now with 53 Cup games to his name, Dilbert was one of only a few veteran leaders in a young Hunters squad this year.

Named in the club’s leadership group in 2022, Dilbert maintained a tremendous level of consistency throughout the regular season to play 15 of a possible 19 games and regularly be one of the Hunters’ best performers. Dilbert was a mainstay of the Hunters pack when fit to contribute four tries and a superb 91.1% tackle efficiency, highlighting his impact on both sides of the ball.

Dilbert’s experience and leadership on and off the field proved invaluable for the Hunters as they completed a two-year relocation period on the Gold Coast this season. He was rewarded for his efforts in 2022 with a selection in the mid-year Pacific Test against Fiji.

It’s clear to see why Emmanuel has carved himself out a reputation as a fan-favourite in his relatively short time at the club.

Emmanuel played 18 games this season – the equal most of any Hunter in 2022 – showing his versatility to line up in the centres, backrow or through the middle. With a knack for busting tackles and a fierce competitive streak, Emmanuel quickly made the #15 jersey his own with his ability to change the momentum of a game with a barnstorming run or a bone-crunching tackle. He finished the year with seven tries, an average 114 running metres and an outrageous 52 tackle-busts.

A keen learner and student of the game, Emmanuel capped off a career-season with selection in the PNG Kumuls World Cup squad.

Don’t let his polite and quiet manner fool you – Rodrick is an ultra-competitor with an exciting future in the game.

Playing 15 games between centre and wing in his debut season, Rodrick showcased all his versatility and skill regardless of the result each week and made the right centre position his own by season’s end. Rodrick is a strong defender with an good tackle technique and a sharp understanding of the game, but it was his ability with the ball in hand that ensured the Hunters finished the 2022 season on a high. His performance against the Mackay Cutters in Round 20 – a game in which he had one try, two try involvements, eight tackle busts and 191 running metres – sums up how damaging Rodrick can be when given an opportunity to attack.

Rodrick finished the regular season with six tries, three assists and an average 107 running metres and capped off a stellar debut year with selection in the PNG Kumuls World Cup squad.

One of the more popular members of the playing squad in 2022, Francis was rewarded for his efforts with a debut jumper in Round 16 and he never looked back.

Starting in the front row in all five games he played this year, Francis showcased his work rate and conditioning to play 60+ minutes in each match as he got busy on both sides of the ball. His eagerness to learn and his desire to not let his teammates down saw Francis post impressive numbers in his debut season; two tries, an average 110 running metres per game and 127 tackles for just 14 misses.

Francis capped off an exciting debut season with selection in the PNG PM’s XIII side that challenged Australia at Suncorp Stadium in the post-season. With time certainly still on his side, the sky is the limit for Francis and his rugby league career.

Few will take more lessons from the 2022 season than rookie playmaker Kingstimer, who carved himself out an impressive debut year at Cup level.

Kingstimer is an avid student of the game and was regularly one of the last to leave the training paddock throughout the season as he worked on his craft. This was evident in both his promising goalkicking record and in the way Kingstimer grew into a lead playmaking role as the season progressed. Playing 17 of a possible 19 games this year between the bench, hooker and in the halves, Kingstimer eventually earned himself the five-eighth position and immediately struck up a likeable partnership with halfback Judah Rimbu.

Kingstimer finished the season with eight try assists and three tries of his own, marking himself as a real player of the future given his natural leadership and communication skills.

After a challenging start to the year, the Hunters put themselves back in the winner’s column with a resounding 42-20 win over the Townsville Blackhawks in Round 8. To make the win even more impressive the Hunters did it all on enemy territory, having travelled to Townsville for the contest.

The influence of Wartovo Puara – playing in just his second game of the season – was palpable in this game as the veteran hooker set up two tries and had a hand in several more. It was immediate evidence that the Hunters had a recipe for success in this squad but were being limited by injuries to key players.

Puara helped prop-forward Sylvester Namo to a double around the ruck while regular finishers Solo Wane, Brandon Nima and Matthew Jesse all troubled the scoreboard and debutant Tyler Han crossed for one in the dying stages to announce himself in Cup grade.

The result affirmed the belief that by improving their discipline and completion rates, and by adding the experience of some senior players, the Hunters could be a force in the 2022 Hostplus Cup competition.

A brave win over the competition leading Burleigh Bears to farewell their stay at Bycroft Oval, Runaway Bay might well have been the highlight of the Hunters season, if not for the heroics of the following week.

With many players having less than 10 games of Cup experience before a ball was kicked in 2022, it was always going to take time for combinations to develop in key playmaking areas and for the playing squad to learn what was required to win games. With that in mind, the contrast between the Hunters in Round 1 and the side that beat Burleigh in Round 19 is significant.

Halves Judah Rimbu and Kingstimer Paraia out-kicked the Bears in this game for a combined 326 kick metres as the Hunters played patiently for field position – something the young side struggled with earlier in the season. As a team, the Hunters completed their sets at 74% as they valued possession and refused to give their opposition free opportunities to attack their line – another area of PNG’s game that markedly improved as the season went on.

It was a fitting way to end a two-year period away from home, during which time there were plenty of lessons learned to set this group up for success in the future.

A fairy-tale finish to the season back on home soil saw the Hunters most capped player – club legend Wartovo Puara – finish off a match winning try that featured several rising stars of the future.

The Hunters gave departing Head Coach Matt Church a fitting farewell in this game as the players showcased all the development they’ve made during his time at the club. Completion rates, discipline, kicking games and defensive systems were all on show as the Hunters fought in true Papua New Guinean fashion right until the 80th minute. With just seconds remaining, the veteran linked with the rookies when Puara combined with Judah Rimbu, Rodrick Tai and Liam Joseph to score a try that will be remembered forever by the Hunters faithful.

To do it all in front of a home crowd for the first time in more than three years made it all the more special.

The SP PNG Hunters farewelled Head Coach Matt Church at the completion of the 2022 season, bringing to a close his two years at the helm of the club. In that time, Church debuted a total 28 players for the Hunters while also navigating an immensely challenging relocation period on the Gold Coast. Despite this, the club still made improvements in key statistical areas in both attack and defence under Church’s tutelage.

While Church’s time as Head Coach has come to an end, the club is well placed to continue its trajectory towards becoming a genuine force in the Hostplus Cup competition.

Just three current players on the Hunters roster have played more than 50 games at Cup level – Wartovo Puara, Dilbert Issac and Brandon Nima. With some luck, the club will usher in a host of new players to the ’50 Club’ next season as the fruits of a two-year building period come to bear and the playing group grows in experience and confidence.

A permanent return to Papua New Guinea in 2023 looms as a significant boost for the club moving forward. The Hunters have played without a home ground advantage for the best part of three seasons now and can expect to improve markedly with the support of their fans, friends and families next season.

With a new Head Coach to be announced over the offseason and most of the current playing group expected to return next year, the SP PNG Hunters will eagerly await the start of the 2023 Hostplus Cup competition.