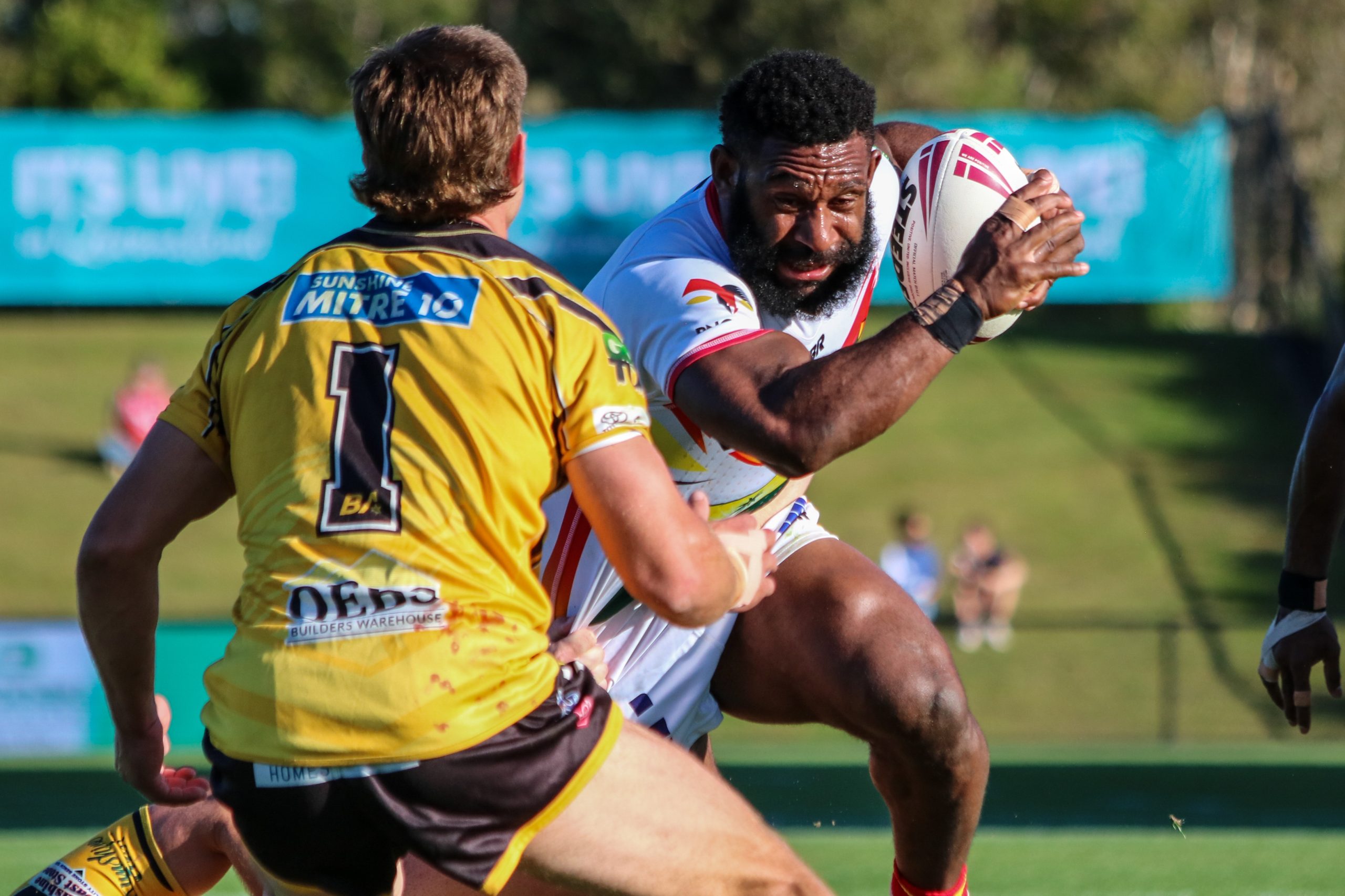 By Oscar PannifexAugust 7, 2022No Comments

The SP PNG Hunters and Sunshine Coast Falcons fought it out in picturesque conditions at Sunshine Coast Stadium on Sunday, with the home side coming out on top 44-6 winners.

From the opening set it was clear this was going to be a physical contest. Hunters’ forward Sylvester Namo came off the back fence from the kick-off and launched himself into a wall of Sunshine Coast defenders, leaving multiple bodies in his wake including Falcons’ prop Max Bailey who was forced from the field.

With the tone set, both sides got to work as the Sunshine Coast locals watched on.

Both sides had early scoring opportunities following the fiery start but neither was able to convert those chances into points. The Falcons forced a drop-out with a smart grubber down their left edge but couldn’t score in the repeat set, and then the Hunters earned attacking field position themselves but were barrelled into touch when searching down a short side on Sunshine Coast’s line.

The Falcons’ swiftly turned defence into offence. Three quick hit-ups through the middle earned a six again and before they knew it the home side was attacking the Hunters line courtesy of a linebreak from Luke Polselli. From the ensuing play-the-ball, the Falcons swung it right to Jack Howarth who crashed over to open the scoring with a big right foot step.

There was a little more luck involved in the home side’s next points when an early exit kick found the grass and took a wicked bounce, beating Hunters’ fullback Tyler Han and landing straight in the lap of Sualauvi Faalogo to score under the posts.

Staring down a 12-0 lead, the Hunters responded with some bone-jarring defence led by Kitron Laka in the following set to force an error. The Hunters would make the most of their field position, setting up camp on Sunshine Coast’s line and scoring through Francis Kembis in the 18th minute thanks to a short ball from Kingstimer Paraia at dummy-half.

With fatigue setting in for both sides, discipline became key. An exit penalty conceded by the Hunters proved the trigger for next points, as the Falcons marched into good ball and set up for a left edge shift late in the count. Three good passes and an even better offload later and Sunshine Coast beat PNG’s sliding defence to gift Faalogo his second of the afternoon.

The Falcons’ next points came just a few minutes later when PNG failed to collect a spiralling attacking bomb in their own half. Sunshine Coast halfback Daniel Atkinson was the beneficiary, scooping up the loose ball to bring the home side’s lead to 22-6 before the break.

The Falcons returned from the sheds with purpose, marching upfield with their first possession of the second half and into position for Tyson Smoothy to land a perfect cross-field kick into the hands of a leaping Grant Anderson to score.

Falcons five-eighth Jack Wright took a leaf out of Smoothy’s book not long after, again positioning himself out the back of shape in good ball to drop a pinpoint attacking kick into the left corner for Faalogo to score his third of the afternoon.

Faalogo was dialled in down the other end of the field too. The Falcons’ winger came flying onto a PNG grubber kick in his own half and raced 60 metres upfield in a dazzling display of speed and footwork. With the resulting field position, Sunshine Coast backrower Jack Gibbons would crash over to extend the host’s lead to 32 points.

Smoothy was in the spotlight again in the 70th minute when he snuck out of half, grubbered in behind the line for Polselli who then passed back inside for Smoothy to dive over under the posts. That would be the final scoring action at Sunshine Coast Stadium on Sunday, with the Falcons running away 44-6 winners and securing the coveted Pacific Allies Cup for the home side.

Head Coach Matt Church was understandably disappointed with the result.

“Our kicking game wasn’t where it needed to be and on the flipside the Falcons kicked really well and probably gave us a lesson in that regard.”

Church wasn’t prepared to make any excuses but conceded the news of a delayed homecoming this week certainly didn’t help.

“That was tough news to receive this week but we need to be resilient and respond better,” said Church.

“The boys are really looking forward to going home but we’ve got a job to do here and we just didn’t execute that well enough today.”