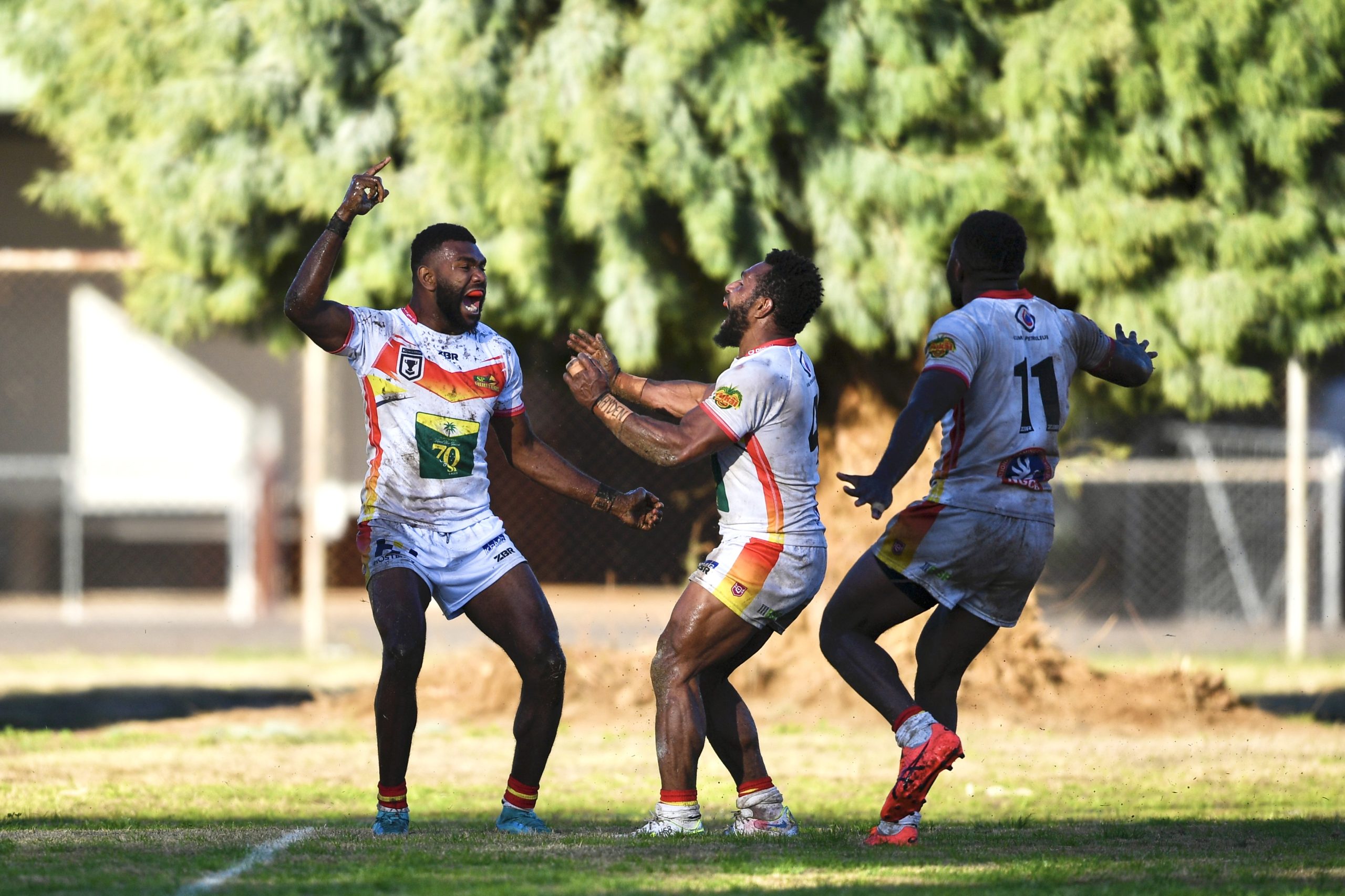 By Oscar PannifexAugust 25, 2022No Comments

The SP PNG Hunters will make their long-awaited return to the Santos National Football Stadium this Saturday, 27thAugust when they host the Mackay Cutters in Round 20 of the QRL Hostplus Cup.

Saturday will mark almost three years to the day since the Hunters played on home soil, following a relocation period to Runaway Bay on the Gold Coast to compete in the Queensland based competition during the COVID pandemic.

The SP PNG Hunters return home is made possible this week thanks to support from the Australian Government’s Department of Foreign Affairs and Trade along with Newcrest Mining Ltd, who have funded the homecoming.

The Hunters will carry some confidence into Saturday’s contest having made light work of the ladder leading Burleigh Bears in Round 19. The Hunters farewelled Bycroft Oval and their Runaway Bay supporters with a compelling 32-24 win over the competition heavyweights last week and will be looking to go back-to-back and finish the 2022 season on a high.

The PNG side have been on a steep learning curve this season and the fruits of that labour showed in last week’s win. The Hunters drastically improved their discipline and long kicking game against the Bears which allowed them to dominate the yardage battle and bring their strike players into the game.

Vice-captain Keven Appo was immense in his return from suspension and was well supported by the likes of Ila Alu, Sherwin Tanabi, Emmanuel Waine and Francis Kembis in the forwards. Having won the ruck, the playmaking skills of Judah Rimbu and the X-factor of Benji Kot proved too much for Burleigh who couldn’t contain the resurgent Hunters outfit in Round 19.

With emotions expected to be at a high in front of a full crowd at Santos NFS on Saturday, the Hunters will be full of confidence as they look to wrap up the ’22 season with a big win at home.

The Mackay Cutters will be feeling the pressure as they fly into Port Moresby later this week, having gone down to the Sunshine Coast Falcons in Round 19. That loss all but ruled Mackay out of finals contention, meaning they face a tough task against the Hunters at home to round out their 2022 campaign.

The last time this sides met was in Round 1 earlier this year when the Hunters opened their account with a 16-10 win over the Cutters in Mackay.

The Hunters overcame the home-ground advantage in that game, scoring two early tries through Solo Wane and Dilbert Issac before defending their narrow lead until the siren.

Playing at Santos National Football Stadium this weekend – a ground at which the Hunters enjoy a 67% win-rate – is a major boost for the PNG side looking to repay the support of their loyal fans back home in Papua New Guinea.

Keven Appo has played out an immense 2022 season having stepped into the captaincy role while Ila Alu was in the casualty ward for most of the year.

At just 23 years of age and with 40 Cup games to his name, Appo has played well beyond his experience this season to lead the Hunters from the front and set a wonderful example for his teammates.

Playing between backrow and lock, Appo has been one of the Hunters best all year. He is a tireless and brutal defender who often tops the tackle count for his side and with the ball in hand Appo runs as hard as the best of them. Against the Bears last week Appo took 17 carries for a whopping 169 running metres, busting four tackles and making a linebreak that led to a Benji Kot try.

That try to Kot has become somewhat of a pet play for the Hunters this season and is something to watch out for on Saturday. Five-eighth Judah Rimbu straightens up the attack nicely on PNG’s left edge before skipping outward and dropping his backrower back under against the grain. It’s an action we’ve seen Kitron Laka execute with great success this season but last week it was Appo slotting in on that left edge and running off his half to break the line.

With Laka ruled out with an injury this week, Appo’s versatility and impact through the middle or on an edge will be crucial to PNG’s chances against the Cutters on Saturday.

Head Coach Matt Church says he is excited to take the players home and is looking forward to playing in front of a packed crowd at the Santos NFS.

“It’s an honour to be the Coach that gets to bring these boys home and I know the players can’t wait to run out in front of their families and friends on Saturday,” said Church.

Church was also positive about the Hunters form improvements over the last month and says that was to be expected.

“We’ve shown some real signs of improvement over the last few weeks and hopefully we can finish the season with a win,” said Church.

“As a coaching staff we knew our best was always going to come in the back end of the season based on the fact that we’ve got so many players in their first year of Cup grade or with limited experience. It’s been a steep learning curve this year but I think we’re seeing now the results of all our hard work.”