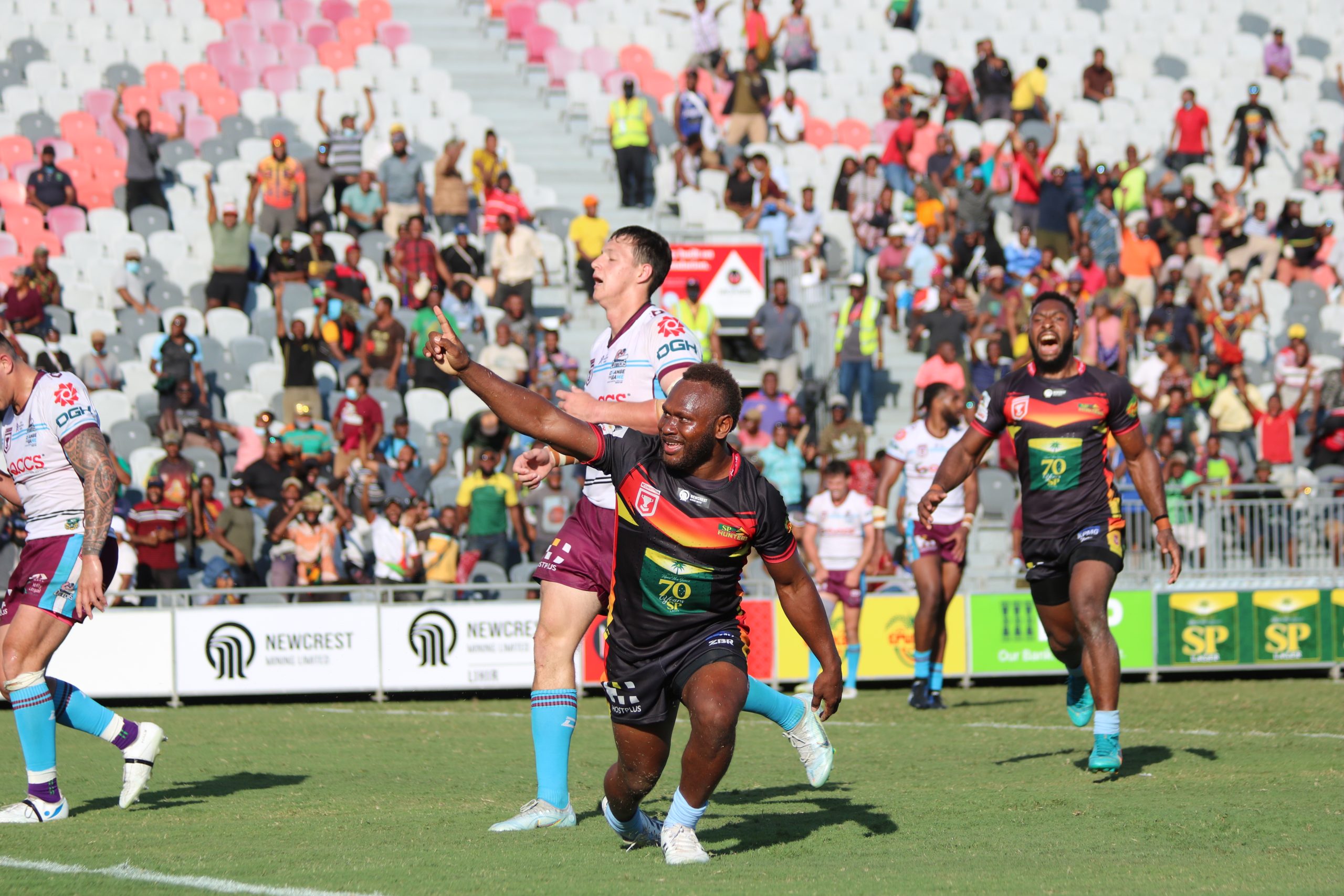 By Oscar PannifexAugust 27, 2022No Comments

The footy gods were smiling down on the Santos National Football Stadium on Saturday afternoon as the SP PNG Hunters pulled off a fairy-tale finish in their homecoming match with the Mackay Cutters in Round 20 of the QRL Hostplus Cup.

Trailing by four points with seconds remaining, the Hunters produced a miracle play with their final possession to beat the Cutters in front of a joyous crowd in Port Moresby to round out their 2022 season.

The 78 minutes prior was a seesawing affair as both sides struggled with their ball security in the humid conditions.

The Cutters were first to trouble the scoreboard when prop Jayden Morgan barged his way over in the 16thminute thanks to a clever switch play from behind the ruck.

Mackay then went over again just three minutes later when Kyle Krisanski-Kennedy took possession out the back of a questionable decoy line to score down the Cutters’ left edge.

Far from going into their shells though, the Hunters quickly responded.

In true PNG fashion, the Hunters frontloaded their defence to batter and bruise the Mackay forwards and quickly gain momentum through the middle of the field.

A clever fifth tackle kick then pinned the Cutters in a corner and the defensive pressure PNG applied forced an error in yardage from Mackay which Hunters’ centre Rodrick Tai punished to score in the 27th minute.

Benji Kot followed in his centre-partner’s footsteps not long after, finishing off a slick left edge movement to latch onto a Judah Rimbu cut-out pass and score in the 34th minute.

With halftime looming, the Hunters then produced some enterprising play down their right edge when five-eighth Kingstimer Paraia ran it on the last to beat the rushing defence before offloading to Sherwin Tanabi in support. Two more clever offloads followed when Tanabi linked with Tai and Tai then found winger Liam Joseph back on the inside who scored in the right-hand corner to give PNG a 14-12 lead at the break.

The Cutters were first to score again in the second half when Luke Wembley crossed in the 44th minute before centre-turned fullback Gehamat Shibisaki exploded with an energetic 15 minute display.

Shibisaki was everywhere for the Cutters midway through the second half; scoring one himself, setting up another for Laitia Moceidreke and denying a third for the Hunters when he intercepted a PNG pass on his own try line.

For all of Shibisaki’s efforts though, the resilience and bravery of this Hunters side – who have not been home since November 2021 and had not played a Cup game on home soil since 2019 – was the difference.

A sinbinning for PNG prop Dilbert Issac with 10 minutes remaining only added to the narrative as the Hunters chased a four-point deficit with the clock winding down and a key player on the sidelines.

As the PNG faithful know all too well though, you can never count out the Hunters.

With just seconds remaining, hooker Wartovo Puara Jnr – the most capped player in the club’s proud history – positioned himself at halfback on the Hunters right edge and orchestrated what can only be described as a rugby league miracle.

A two-pass shift through Puara Jnr got Rodrick Tai at a retreating defence despite Mackay’s numbers advantage and the centre put on a specialist move to beat his opposite man and pass winger Liam Joseph down the touchline.

In just his fourth Cup game, the 20 year old Joseph then beat no less than four Cutters defenders to get the ball free and flick a one-handed offload back inside to Puara Jnr in support. With the fullback still to beat, Puara Jnr sold him a dummy for the ages to skip back in towards the posts and dive over as the locals erupted with excitement.

It was a poetic end to both a challenging season and an even more challenging three-year relocation period for the Hunters, who demonstrated that Papua New Guinea is well and truly ready to regain its status as a rugby league heartland in 2023.

“It’s a great exclamation point on the back of almost three years being away from home,” said Church.

“I’m just incredibly proud. No other group could have done what this group has done and endured what they’ve endured and still never, ever give up.”