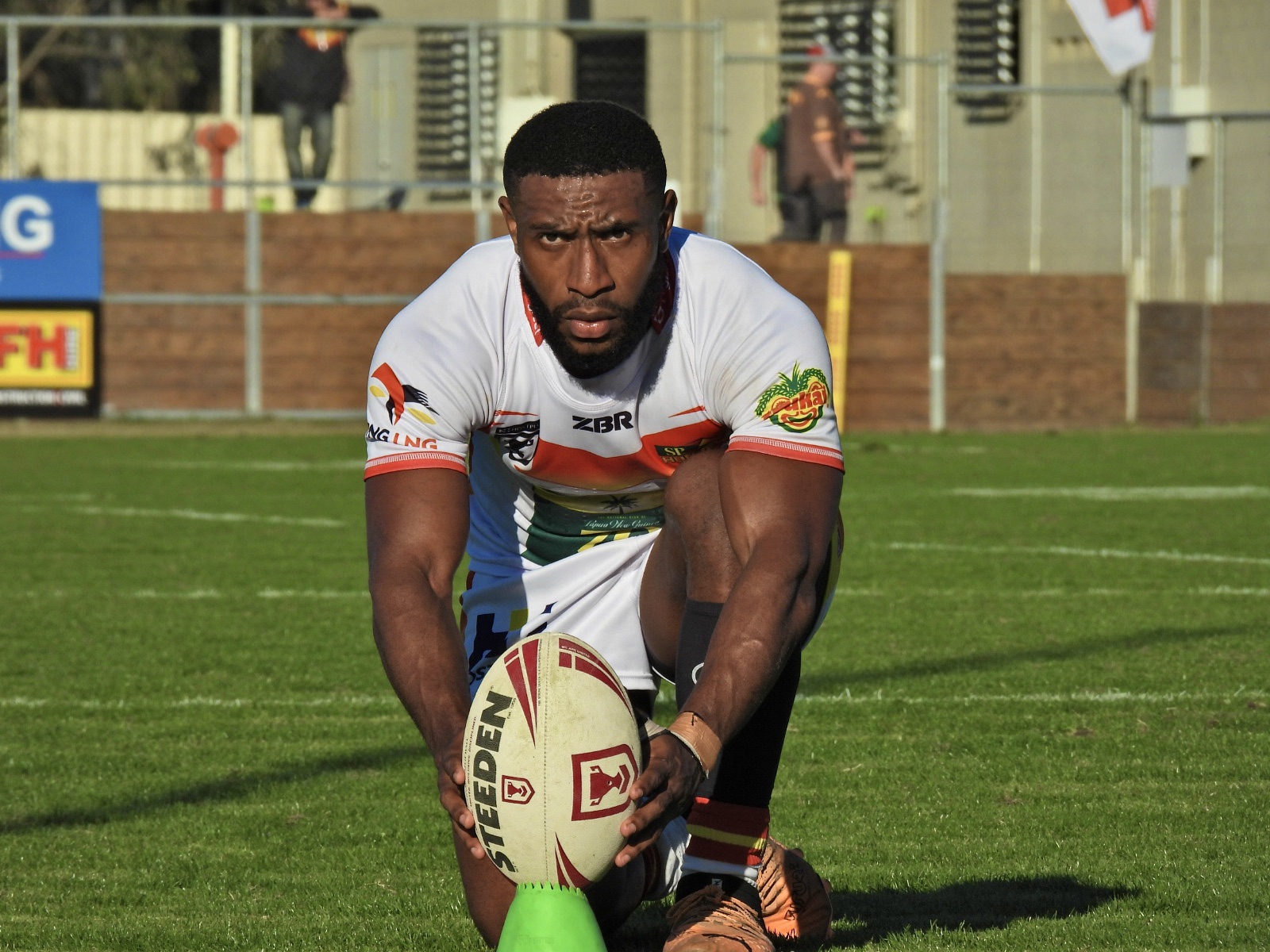 By Oscar PannifexJuly 14, 2022No Comments

The SP PNG Hunters will play host to the Central Queensland Capras this Sunday, 17th July at Bycroft Oval, Runaway Bay in Round 15 of the QRL Hostplus Cup.

The Hunters will ride a wave of confidence into this weekend’s contest, having produced their best performance of the season last week against the Wynnum Manly Seagulls to win 36-22.

There were some notable changes to the Hunters’ squad who won that game – namely a new halves pairing of Kingstimer Paraia and Judah Rimbu, and skipper Keven Appo’s move from edge forward to lock – but the most significant difference between the Hunters’ of Round 14 and the 2022 season as a whole was their intent and aggression on both sides of the ball.

The stats from that game make for interesting reading. The Seagulls spent more time in possession, took more runs and missed less tackles than the Hunters yet both sides were evenly matched in yardage. Wynnum clocked just 30 additional running metres across the 80 minutes despite enjoying the bulk of possession, as they spent much of their time working off their own try line thanks to the kicking game of Rimbu and Paraia for the Hunters.

Completing at 82% – a vast improvement from their season average of 69% – allowed the Hunters to build pressure and play the game down Wynnum Manly’s end. It doesn’t show on the stats sheet, but the confidence and momentum the Hunters created with their kicking game flowed into how they used the ball in attack. It’s no coincidence that one of the Hunters’ better attacking performance of the season coincided with a dominate defensive display.

The other thing that doesn’t translate onto the stats sheet is the force of contact the Hunters applied on both sides of the ball. In true PNG fashion, the Hunters’ front-loaded their defensive efforts to dominate Seagulls’ ball carriers around the ruck. Sylvester Namo, Dilbert Issac and Keven Appo led the Hunters’ line speed all game and consistently won the tackle to put Wynnum Manly on their backs in yardage sets. This was backed up in attack as the Hunters constantly bent the line to earn post-contact metres and generate ruck speed for their team.

It’s a blueprint for success for the SP PNG Hunters in 2022 and now the challenge is to back it up against another top four side this week in the CQ Capras.

The Capras leaped to third place on the QRL ladder last week following the Hunters’ win over Wynnum Manly and on the back of their own narrow win over the Sunshine Coast Falcons.

A two point margin was all that separated the Falcons and Capras when the siren sounded in Round 14, with Yee-Huang Tonumaipe’a scoring a late try for the Sunshine Coast as they threatened a comeback.

That 22-20 win over the Falcons capped off a shaky month of football for the Capras, who also managed a close win over the Blackhawks in Round 11 before drawing with Redcliffe in Round 12 and losing to Tweed in the following week. The Capras’ recent winning record is a far cry from their 4-and-0 start to the season, which included a 26-16 win over the Hunters in Round 2 at Browne Park.

Given the improvements the Hunters have shown since that game and their form in Round 14, the PNG side will be every chance of turning the tables and exacting revenge on the Capras this weekend at Bycroft Oval.

Hunters’ interchange hooker Wesser Tenza had a breakout game in Round 14. The 29 year old played just his eighth Queensland Cup match against the WM Seagulls last week but all his experience, craft and influence from behind the ruck was on show in a 30 minute stint either side of halftime.

Coming on at the 25 minute mark, Tenza immediately began manipulating the marker defenders. Holding the ball out in front, Tenza engaged the ruck defence to bring his forward teammates onto the ball or take the easy metres himself when the markers weren’t set.

He did exactly that in the lead up to Keven Appo’s try; a quick play-the-ball from Junior Rop had Wynnum Manly retreating and Tenza scooted from half to burn the markers and pass the 103kg Dilbert Issac into the 77kg Sam Scarlett on the Seagulls’ try line. Issac won that match-up comfortably to get another quick play-the-ball as Tenza marshalled his troops from behind the ruck. With Rop and Appo running in a tight pair close to the line, Tenza picked out Appo and although the pass was a poor one, the shape beat Wynnum with Appo collecting the loose ball to score.

Tenza’s next try involvement was a little more clinical. Again directing teammates from dummy-half, Tenza instructed Issac and Rop to run a block shape close to the ruck which compressed Wynnums’ middle defence and created space beside the left post. A crisp pass got Rop into the half gap and the big forward powered through the line to plant the ball down with his fingertips.

Ila Alu’s try just after halftime was a carbon copy of Appo’s try, only the pass from Tenza this time was a beauty. Another strong carry from Issac bent the Seagulls’ line to generate some ruck speed and before they could react, Tenza had picked out Alu with a perfect face ball to crash over the line and score.

Saving the best for last, Tenza was then the trigger for Solo Wane’s length of the field try in the Hunters’ very next set. Receiving the ball from the kick off, Tenza spotted some space down the short side and pushed Paraia and the Hunters’ right edge into position. Some nice ballplaying from Paraia got Rodrick Tai into half a gap and the skillful centre sprung to life to bust the line and link with Wane in support.

Tenza’s starring performance in Round 14 is a perfect example of the challenges the Hunters have faced in 2022 and the trajectory they are on, moving forward.

The Hostplus Cup is a significant step up from Digicel Cup grade and it is a difficult transition for players to make – particularly playmakers. The speed of the game is quicker, the defensive systems of your opponents are vastly improved, rules can be interpreted differently and certain playing styles work better than others.

Tenza has made that transition relatively quickly and is testament to the approach the Hunters’ coaching and high performance staff have taken this season. His ability was apparent from his Cup debut in Round 1 but it was always going to take time for Tenza to adapt and learn what works for him at this level. An injury in Round 5 also hampered his progress but in Round 14 we got to see the intelligence, craft and vision that Tenza brings to the dummy-half position and he’s one to watch again this weekend.

Head Coach Mathew Church says the challenge now is for his players to maintain the standards set last week.

“We set some high standards for ourselves last weekend and now we’ve got to back them up,” said Church.

“I thought our communication was really good last week. It was evident in how we played – we looked organised and were set up nice and early in attack so we need to replicate that again on Sunday.”

Church paid tribute to an opposed session with the QLD Maroons Origin squad last week as a great learning experience for his players.

“I think the boys took a lot out of that opposed session with the Maroons last week,” said Church.

“Just seeing how those guys train, how they talk on the field – I think seeing that first-hand at training translated into our own performance on the weekend. It was a great learning experience for us.”