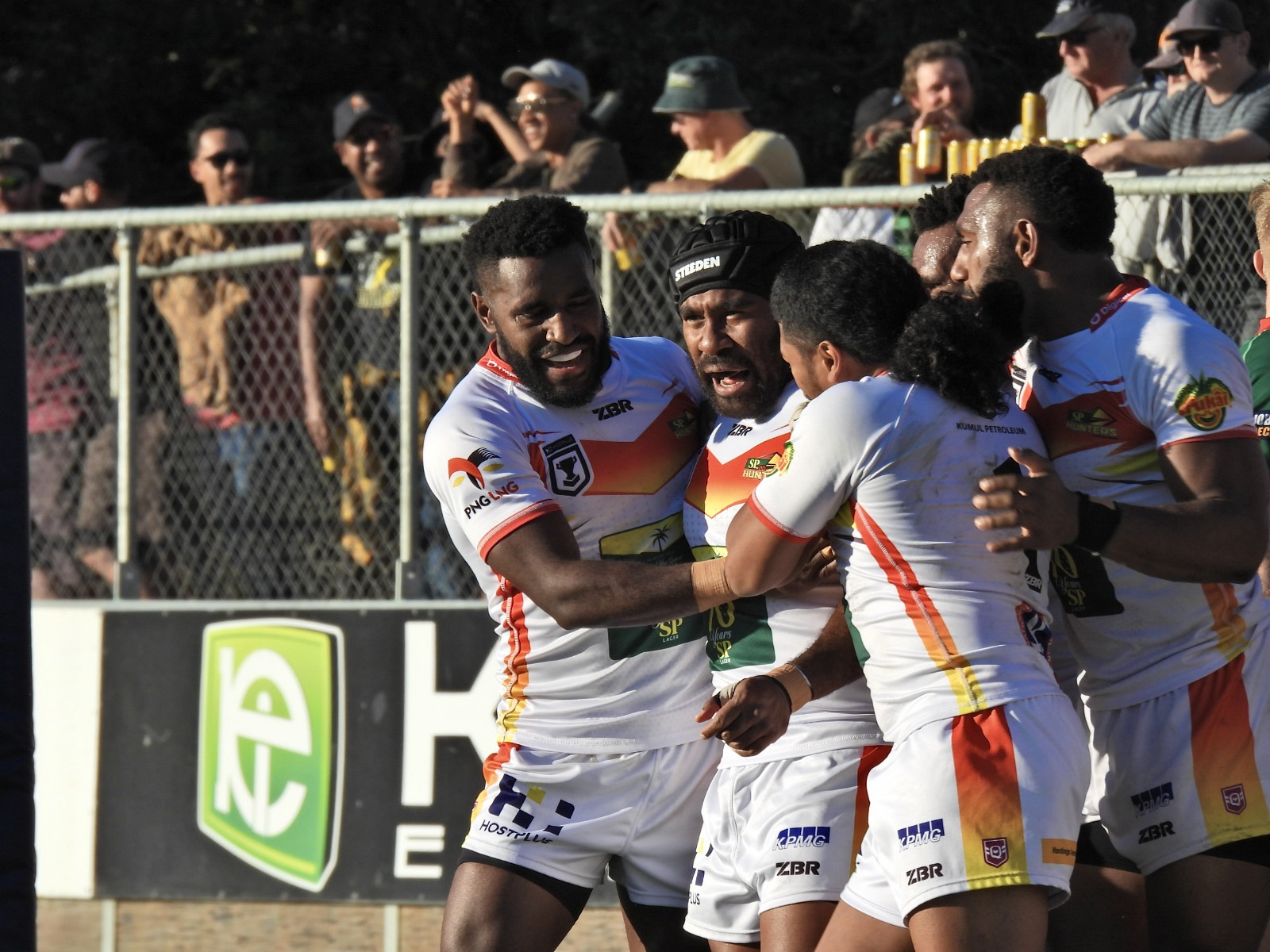 By Oscar PannifexJuly 9, 2022No Comments

The SP PNG Hunters have produced an inspired 36-22 win over last year’s grand finalists Wynnum Manly Seagulls in Round 14 of the QRL Hostplus Cup.

In picturesque conditions at BMD Kougari Oval on Saturday afternoon, the Hunters embraced the lively Wynnum crowd and their intent was evident from the kick-off. The PNG side worked into attacking field position confidently with just their second possession and looked dangerous with the ball until some resolute Seagulls’ defence forced the first error of the match.

Marching upfield themselves in response, it was Wynnum Manly who would go on the attack next. They looked to have scored courtesy of a smooth right edge shift only for Hunters’ backrower Kitron Laka to appear out of nowhere in cover and knock the ball loose over the line, saving a certain try.

Discipline was the telling difference between this Hunters’ side and the one that lost to Ipswich last week.

The Hunters poured through the middle as their middles consistently bent the line in yardage and got through their sets. A new-look halves pairing of Kingstimer Paraia and Judah Rimbu were allowed to play over the advantage line as a result, kicking smartly to the corners to slowly win field position for their team. With every set the Hunters completed they looked more likely to crack Wynnum’s line, and sure enough when a lock-in defensive set forced a Seagulls error deep in their own half, the Hunters would capitalise with cold efficiency.

Targeting the middle, the Hunters compressed Wynnum’s line thanks to Paraia’s work around the ruck before shifting quickly to Rimbu on the left edge. Taking possession in space, Rimbu straightened the attack nicely to drop a charging Laka back against the grain to score in the 11th minute, backing up his try saving effort down the other end to open the scoring for the Hunters.

Wynnum Manly were next to score in what was becoming a fierce and seesawing contest.

When the Hunters failed to find touch with a penalty kick in yardage, the Seagulls would take advantage of the field position to score through Dredin Sorensen in a carbon copy of their first attacking raid down that edge. Sorensen wouldn’t be denied by the cover defence twice though, stepping back inside his opposite man to dive over in the right corner.

The game quickly settled into the grind, with highlight moments mostly coming in defence. A few crunching shots from the Hunters’ Sylvester Namo and Dilbert Issac on former teammate Epel Kapinias – coming off the bench for Wynnum on Saturday – typified the intent PNG brought to BMD Kougari Oval in Round 14.

Neither side looked in danger of conceding next points as both defensive systems held, until Hunters’ hooker Wesser Tenza took the field late in the first half and for immediate effect.

Showcasing nice skill and deception from behind the ruck, Tenza passed PNG into good ball as he worked over Wynnum’s middle defence. He would first get lucky when a loose pass hit the deck, taking a friendly bounce for skipper Keven Appo to pluck off his laces and dive over to score, giving PNG a 12-4 lead.

Tenza’s next two involvements were less opportunistic. Junior Rop was Tenza’s next target close to the line – collecting a subtle and accurate pass this time from Tenza who was making a mockery of the Seagulls’ ruck defence.

Not long after halftime, Tenza again smartly worked his forwards into good field position before some lovely sleight-of-hand and a clever pass put Ila Alu over beside the posts in the 43rd minute, capping off a three try-assist frenzy from Tenza either side of halftime.

On the back of the momentum Tenza helped to create around the ruck, the Hunters’ right edge came alive. Hunters’ centre Rodrick Tai made multiple half-breaks in the second stanza with his footwork and strength through contact terrorising Wynnums’ edge defence. Sure enough, Tai would bust the line working out his own end in the 46th minute and winger Solo Wane provided the speed and support to turn the half chance into points.

With a 30-4 lead midway through the second half, the Hunters’ were perhaps guilty of taking their foot off the pedal. The Seagulls showed great resilience to threaten a late comeback, running in three tries in quick succession to narrow PNG’s lead to eight.

The Hunters’ nerve would hold though, absorbing the pressure of a fast-finishing Seagulls’ outfit to eventually force an error in the 76th minute as Wynnum tried to shift it left. Wane would pounce on the loose ball and race 70 metres upfield to seal the result for the Hunters.

Head Coach Matt Church was elated with his side’s intent and discipline.

“We showed today what we can do when we execute our gameplan,” said Church.

“Our intent was good today. We won the collision which allowed us to get over the ad line and play our footy. Our discipline was really pleasing.”

Church also paid tribute to captain Keven Appo, who was immense in moving to the middle and playing the full 80 minutes.

“Keven was great for us today. He gets through so much work and really tightened us up through the middle. A real captain’s knock from him today.”