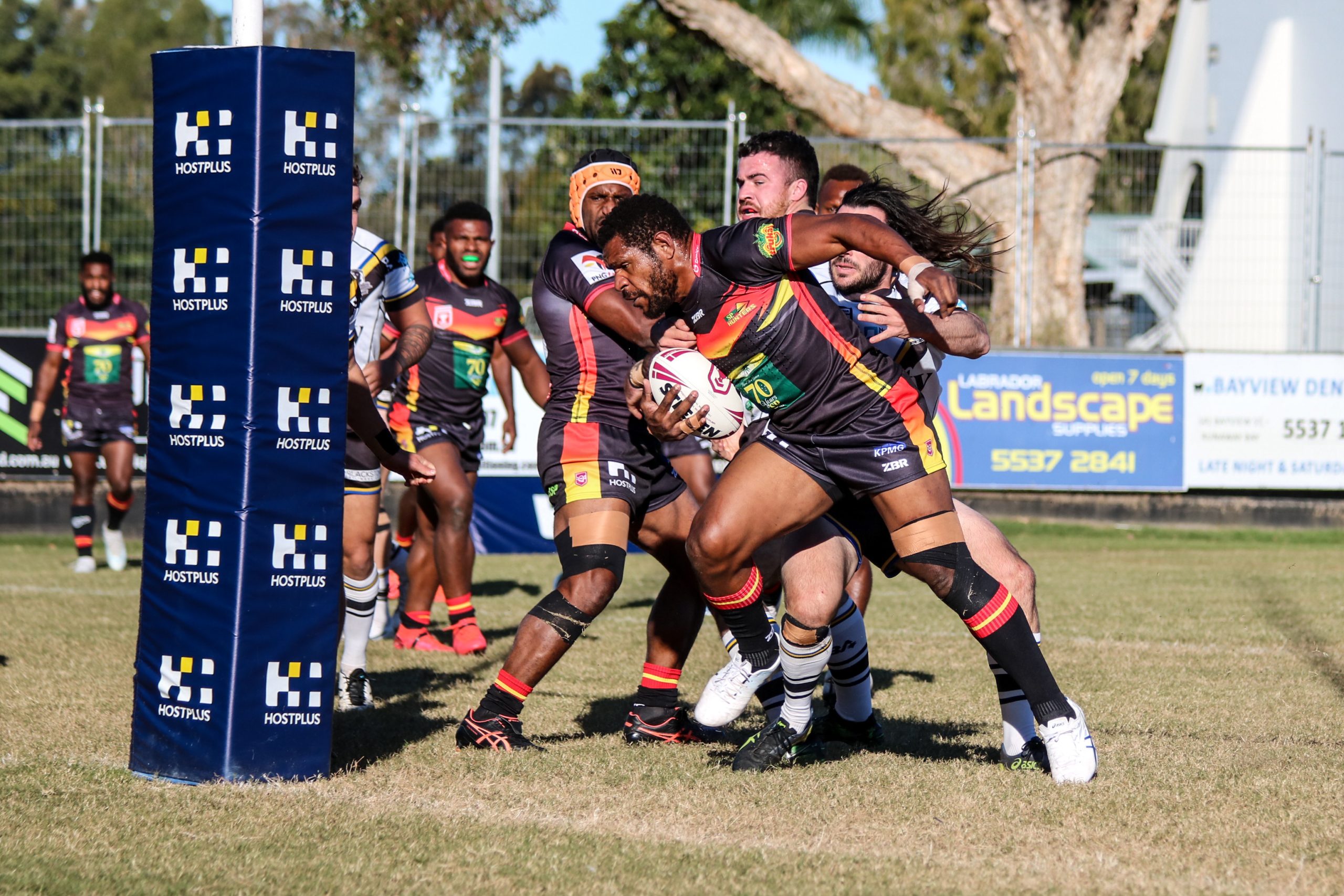 By Oscar PannifexJune 11, 2022No Comments

The SP PNG Hunters have pulled off a brave 26-22 win over the Souths Logan Magpies on Saturday afternoon in Round 11 of the QRL Hostplus Cup.

The relief was palpable across Bycroft Oval when the fulltime siren sounded on Saturday, with the Hunters holding onto a four point lead in the final quarter while Souths Logan desperately fought for their second win of the season. They couldn’t do enough though, as the Hunters defended their narrow lead to claim a much needed two competition points.

In picturesque conditions at Bycroft Oval it was the Hunters who would start fast at their home-away-from-home, playing to their strengths through the middle to generate some ruck speed and work into attacking field position.

From there, Junior Rop dug deep into the line to engage the defence before popping a lovely short ball to Dilbert Isaac in support. Isaac would crash into two Magpies defenders – and the goal posts – on his way to scoring the opening try of the match.

The Magpies responded in kind, taking advantage of some ill-discipline from the Hunters to work upfield and camp themselves on PNG’s own try line. They would go no further though, with the Hunters working smoothly in unison as Souths Logan shifted the ball to both edges only to be met with a resolute defensive unit. Three consecutive sets the Hunters were able to repel before finally taking possession and promptly charging 90 metres upfield and into attack themselves.

Slotting Judah Rimbu in at fullback (with Tyler Han and Matthew Jesse in the casualty ward this week) proved a master stroke from Head Coach Matt Church, as the young playmaker provided some slick hands out the back of Hunters’ shape in attack. Rodrick Tai was the beneficiary in the 15th minute – making the most of some early ball to put a brutal left hand fend on his opposite man and dot down on the right edge to stretch the Hunters’ lead to 12-0.

After such a fast start, the Hunters were dragged into the grind by Souths Logan and the game became a seesawing affair, with neither side able to maintain momentum.

The Magpies clawed back with two quick tries to Christian Hazard and Harradyn Wilson but their good work was undone when Terry Wapi produced his second aerial acrobatic effort in as many weeks, planting the ball down in the left hand corner in the 33rd minute while the rest of his body was airborne and out of play.

Wapi’s celebrations were short-lived though, as Souths Logan answered straight back with winger Benaiah Bowie finishing off a sharp left-edge movement in the 38th minute which brought the scores to 16-all at halftime.

After a high scoring opening half, both teams left the sheds for the second stanza ready to embrace the grind.

Neither side had trouble getting out of their own end with penalties and errors giving away field position cheaply for both parties, and it was Souths Logan who would capitalise on this first when Justin Fai crossed in the 46th minute to give the Magpies the lead for the first time on Saturday.

The Hunters didn’t panic, absorbing the pressure and controlling the ball to fight their way back into the game when the ever reliable Solo Wane scored in the 55th minute. Again it was the ballplaying of Rimbu at fullback that would strip Souths Logan of numbers and pass a teammate into space to score.

For all the smart work of their outside backs though, it was PNG’s middle forwards who were most influential for the Hunters in Round 11 and Dilbert Isaac’s second try of the night was testament to that. The tireless prop-forward capped off another starring performance by crashing over in the 60th minute to take back the lead and set things up for a nail-biting final quarter.

Despite coming close on a number of occasions, Souths Logan couldn’t produce a miracle play in the final 20 minutes, as the Hunters scrapped and fought for their third win of the season, finishing 26-22 over the Magpies.

Head Coach Matt Church was pleased to see his players’ efforts translate onto the scoreboard in Round 11.

“That was a good result for us today,” said Church.

“Internally we’ve known that win has been coming for a while now, and it’s really pleasing to see the boys stick to the process and get some reward for effort. We are constantly learning and growing as a group, and we’ll take a lot out of winning a close game like that.”

“There’s still a long way to go, but that win is a good example of how far we’ve come already this year.”

Church was full of praise for the whole squad, but made special mention of two-try hero Dilbert Isaac, captain Keven Appo and fill-in fullback Judah Rimbu.

“Dilbert was huge again for us tonight,” said Church.

“He’s been one of our more consistent performers all season and he thoroughly deserved those tries today. Keven had a great captain’s knock too, and young Judah to come in at late notice – I thought he really did a job for us there today.”