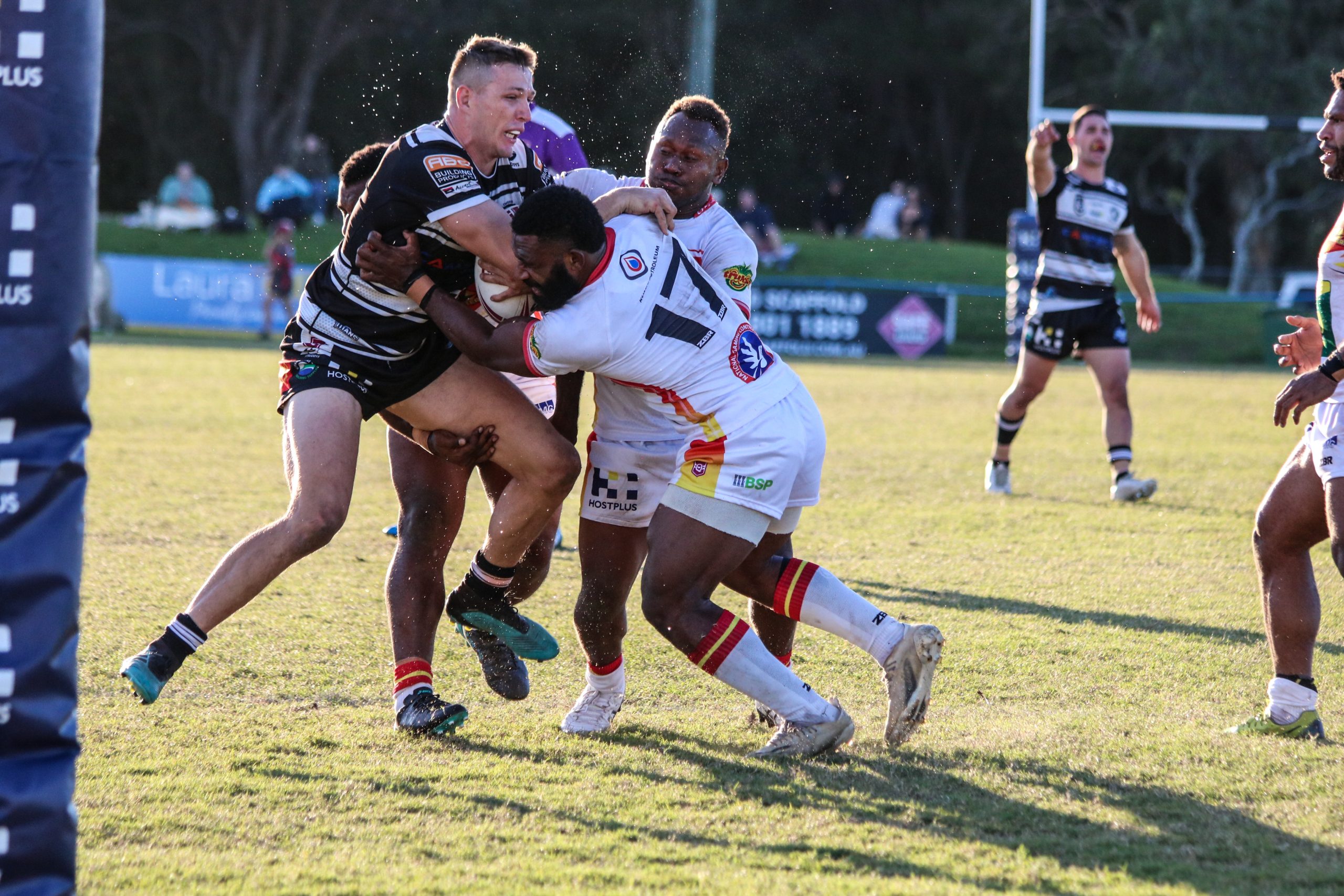 By Oscar PannifexJune 9, 2022No Comments

The SP PNG Hunters will play host to the Souths-Logan Magpies at Bycroft Oval this Saturday, 11th June, 3pm in Round 11 of the QRL Hostplus Cup.

The Hunters will be stinging after falling agonisingly short to the Tweed Seagulls last Sunday, with a late field goal proving the difference in that game. In promising signs, the Hunters matched Tweed – a noted attacking outfit – with four tries apiece, including a spectacular solo effort from Kitron Laka and a feat of aerial acrobatics from Terry Wapi.

Laka showed immense strength to barge over in the 60th minute, running off Wartovo Puara Jr as the veteran hooker schemed across-field near the posts. Taking possession with a full head of steam back against the grain, Laka steamrolled one would-be defender, brushed aside another to break the line, scrambled back to his feet and carried another three Seagulls into the in-goal with him to plant the ball down. Wapi was next to score for the Hunters, somehow getting the ball down with one-hand in the left corner despite two Tweed defenders desperately trying to push him into touch.

Highlight reel moments aside, most promising for the Hunters in Round 10 was an ability to stick to the gameplan.

Early tries to Keven Appo and Brandon Nima came thanks to some slick playmaking from Mark Tony and are repeatable actions the Hunters can replicate in future games. Tries to Laka and Wapi later in the piece similarly came from within playing structures the Hunters have been developing throughout the season.

It’s no coincidence that the Hunters’ best footy has come in the last few weeks now that combinations have had time to grow and the squad has experience playing together in the QRL competition. A similar performance this weekend against Souths-Logan Magpies will have the SP PNG Hunters positioned nicely to notch their third win of the season.

The Magpies will also be looking to bounce back after a disappointing 16-24 loss to the Northern Pride in Round 10. It’s been a challenging season for Souths Logan but with just two competition points separating both teams on Saturday, the Magpies are not to be underestimated in this one.

Mark Tony had arguably his best game for the SP PNG Hunters in Round 10.

Two classy try assists for Keven Appo and Brandon Nima helped get the Hunters off to a strong start against the Seagulls last weekend and they were unlucky to not come away with the result.

In both scoring actions, Tony’s ability to challenge the line with his running game is what created the space for his teammates to dot down. By playing nice and direct on the left edge, Tony was able to engage multiple defenders before dropping a pin-point grubber kick behind the line for Appo to score, and then popping a neat short ball into space for Nima shortly afterwards.

That little grubber kick is an action Tony has executed consistently throughout 2022. As combinations continue to develop on the left edge, Tony’s short kicking game can become a reliable weapon for the Hunters as the season progresses.

Head Coach Matt Church was pleased with the player’s effort areas last week but is looking for better execution in attack against the Magpies.

“We need to take our opportunities in attack,” said Church.

“We created enough chances for ourselves against Tweed last week but unfortunately didn’t capitalise on them. It was pleasing to see the players turning up for the full 80 minutes but we need to be better with our execution.”

Church was also pleased to see Wapi reclaim the fullback position for Round 11 as Tyler Han nurses a minor leg injury.

“That’s something Terry’s worked hard to rectify in the last few weeks and he deserves his chance at fullback this week.”