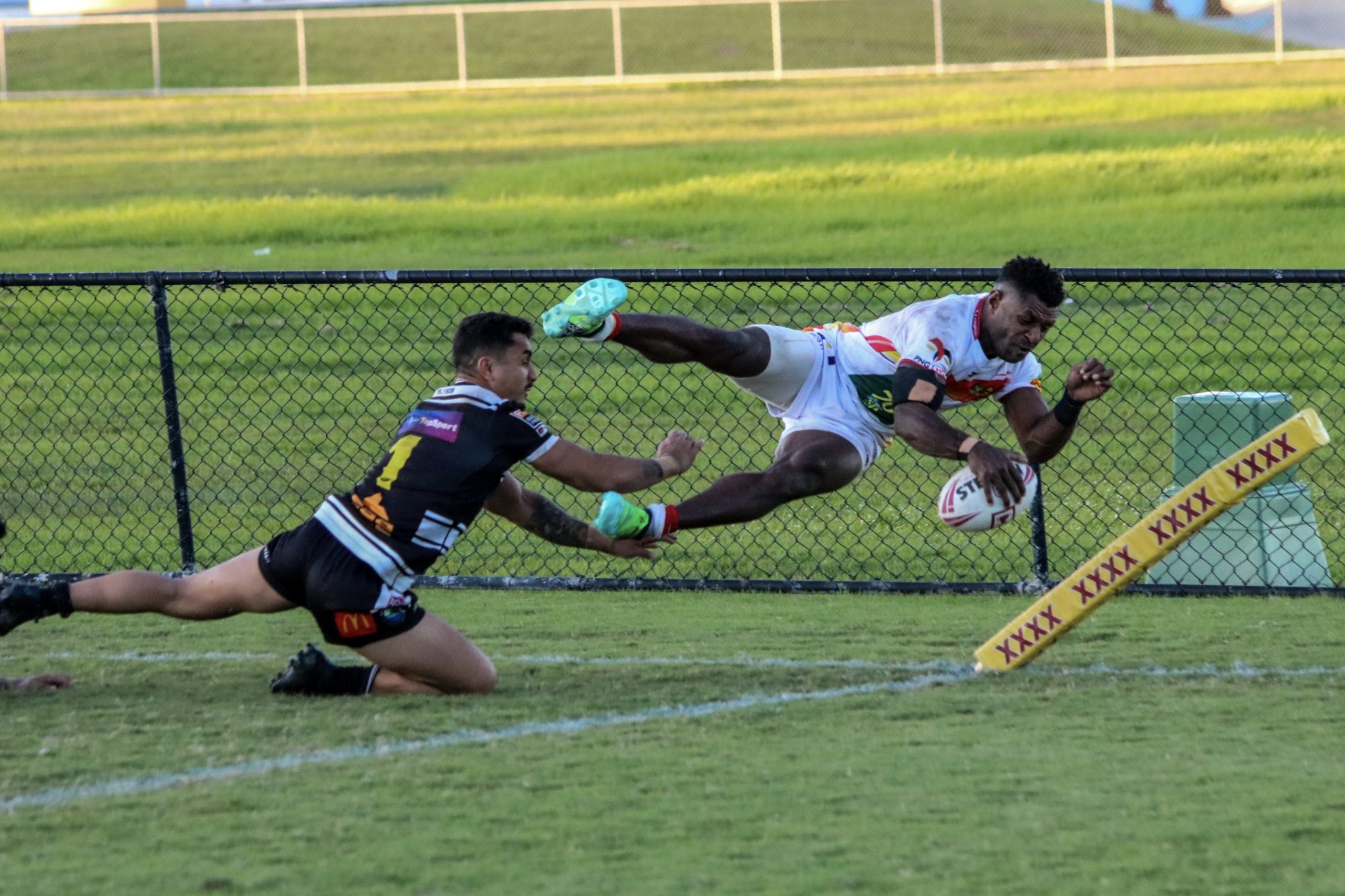 By Oscar PannifexJune 5, 2022No Comments

The SP PNG Hunters tied things up with just minutes remaining against Tweed Seagulls on Sunday, 5th of June only for Tweed to slot a field goal at the death that secured the win in Round 10 of the QRL Hostplus Cup.

In perfect conditions at Tugun RLFC on Sunday afternoon it was the Hunters who would strike first, capitalising on some early field position to threaten Tweed on both edges before setting up a left-side backline movement. Five-eighth Mark Tony played nice and deep into the line to engage the defence before dropping a pinpoint grubber into space for Keven Appo to open the scoring.

Tony was at it again a few minutes later, orchestrating a left edge shift in Tweed’s half and this time linking up with centre Brandon Nima with a lovely short ball at the line. Nima would race 30 metres away to score beneath the posts and give PNG a 12 point lead.

Having been starved of possession to begin the game, the Seagulls would drag themselves back into the match on the back of some ill-discipline from the Hunters. Repeat sets and turnovers gifted Tweed attacking field position and JJ Collins would capitalise on this to dot down underneath the posts in the 23rd minute before interchange hooker Blake Scott found another four points out of dummy-half in the 31st minute.

With the scores locked up at 12-12, both sides were having no trouble working upfield with the ball and began trading shots at the other’s line. Tony continued to threaten on PNG’s left edge and looked like having a hand in another few scoring actions only for the final pass to go awry.

With halftime approaching Seagulls’ centre Lee Turner was binned for a high shot to gift PNG a chance to trouble the scoreboard, but with a missed conversation the scores would remain tied at the break.

The second half started a little more slowly, with both sides competing for field position as fatigue began to work into the game.

Despite being down to 12 men, the Seagulls were resolute with their line defence and patient in yardage, slowly earning field position until a clever left edge movement on PNG’s line saw Joshua Patston barge over to give Tweed the lead.

Seagulls’ winger Sosefo Fifita was next to score courtesy of a classy cross-field kick into the right-hand corner, but with 20 minutes to go the SP PNG Hunters came alive.

Kingstimer Paraia made an instant impact in attack from the bench and between he and Wartovo Puara Jnr the Hunters forced two drop-outs to camp Tweed on their own line. Kitron Laka would barge over shortly afterwards before a try of the season contender from Terry Wapi would draw things up with just minutes to go.

Again on the Hunters’ left edge, Nima managed to get a late offload away to Appo who engaged the defence before passing to Wapi down the left touchline. With the fullback still to beat, Wapi absorbed heavy defensive contact before somehow planting the ball down before going into touch.

Left with an extremely difficult conversation in windy conditions to take the lead, the Hunters would fall agonisingly short to notching their third win of the season with the Seagulls slotting two late field goals to secure the win in the dying stages.

Head Coach Matt Church was bitterly disappointed in the result but proud of his player’s efforts.

“Obviously it hurts to lose in the final minutes, but my message to the players was to focus on what we got right,” said Church.

“I can’t fault their efforts and it was really pleasing to see us stick to the gameplan throughout. That’s what got us back in the contest at the end there, and it’s just little errors in key moments that’s costing us.”

Church was full of praise for the senior players and the experience they provided.

“I thought Wartovo (Puara Jr) was great for us tonight in both positions. And Terry (Wapi) showed his class tonight – he’s been out of the side for a few weeks and it’s a credit to him that he was able to work on what he needed to and fight his way back into the team,” said Church.