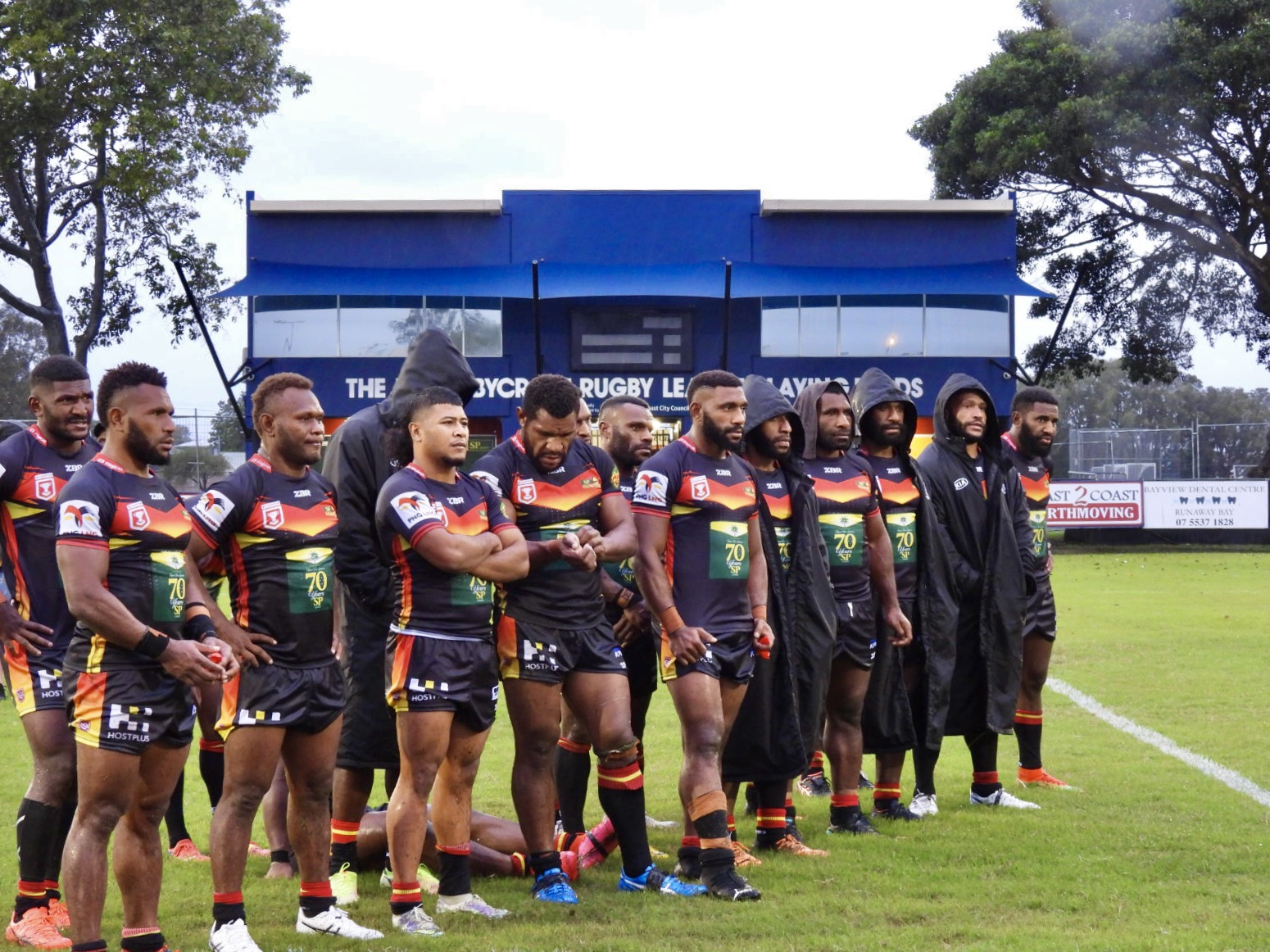 By Oscar PannifexMay 21, 2022No Comments

The Redcliffe Dolphins will retain the Stan Joyce Cup in 2022 having defeated a fast-finishing Hunters side 30-16 in miserable conditions on Saturday in Round 9 of the QRL Hostplus Cup.

The Dolphins were animated from the kick-off, capitalising on a Hunters’ forward pass and ruck infringement in the opening sets to camp themselves on PNG’s try line. The Hunters were defending well until Redcliffe hooker Sheldon Pitama spied some space around the ruck and slid over in the slippery conditions to give Redcliffe a four point lead.

The Hunters would respond immediately, working upfield from the kick-off thanks to a relieving penalty before punching through Redcliffe’s middle to set up for a right edge shift. Hunters halfback Jamie Mavoko would provide the deft grubber for Rodrick Tai on the last tackle to bring the scores to 6-4.

After a fast start, the game settled into a grind with poor ball control and ill discipline helping both teams get out of their own end and mount an attack. It was the Dolphins who would adapt best to the wet conditions however, with Redcliffe fullback Trai Fuller impressing with a 50 metre run out of his own end before diving on a clever kick back in behind the ruck in the 18th minute to score under the posts.

Warriors-contracted outside back Edward Kosi was next to trouble the scoreboard, crossing on either side of halftime thanks to some smooth backline movements down Redcliffe’s right edge before Cody Hunter scored in the 60th    minute to give the Dolphins a 20 point lead.

The Hunters showed great intent and energy to keep turning up in the horrid conditions and weren’t short of scoring opportunities themselves throughout the match. A desperate Redcliffe defensive unit held firm for the most part, until two quick tries inside the final ten minutes saw PNG finish the game encouragingly.

Brandon Nima ducked out of dummy-half close to the line and found prop-forward Dilbert Isaac in support to score in the 74th minute, before a lovely pass from Wartovo Puara Jnr sent Sylvester Namo over virtually untouched beside the right post with just thirty seconds remaining.

The score will disappoint for Hunters fans but PNG’s resilience in awful conditions was compelling and they will take some confidence from the way they fought themselves back into the game.

Head Coach Matt Church was disappointed given the improvements shown over the last two weeks.

“That was a disappointing result for us. Everything we’ve done well over the last two weeks we just seemed to forget today,” said Church.

“We know we’re at our best when changing the direction of our attack and using the power and footwork of our middles, but we just went away from that today. You saw what happened when we played to our strengths late in the game – they couldn’t stay with us and we scored twice in 10 minutes.”

“Credit to Redcliffe, they barely made a mistake in the second half and were good tonight, but we can be better. The conditions were awful and we were willing on both sides of the ball, but just not smart enough with how we used the footy today.”