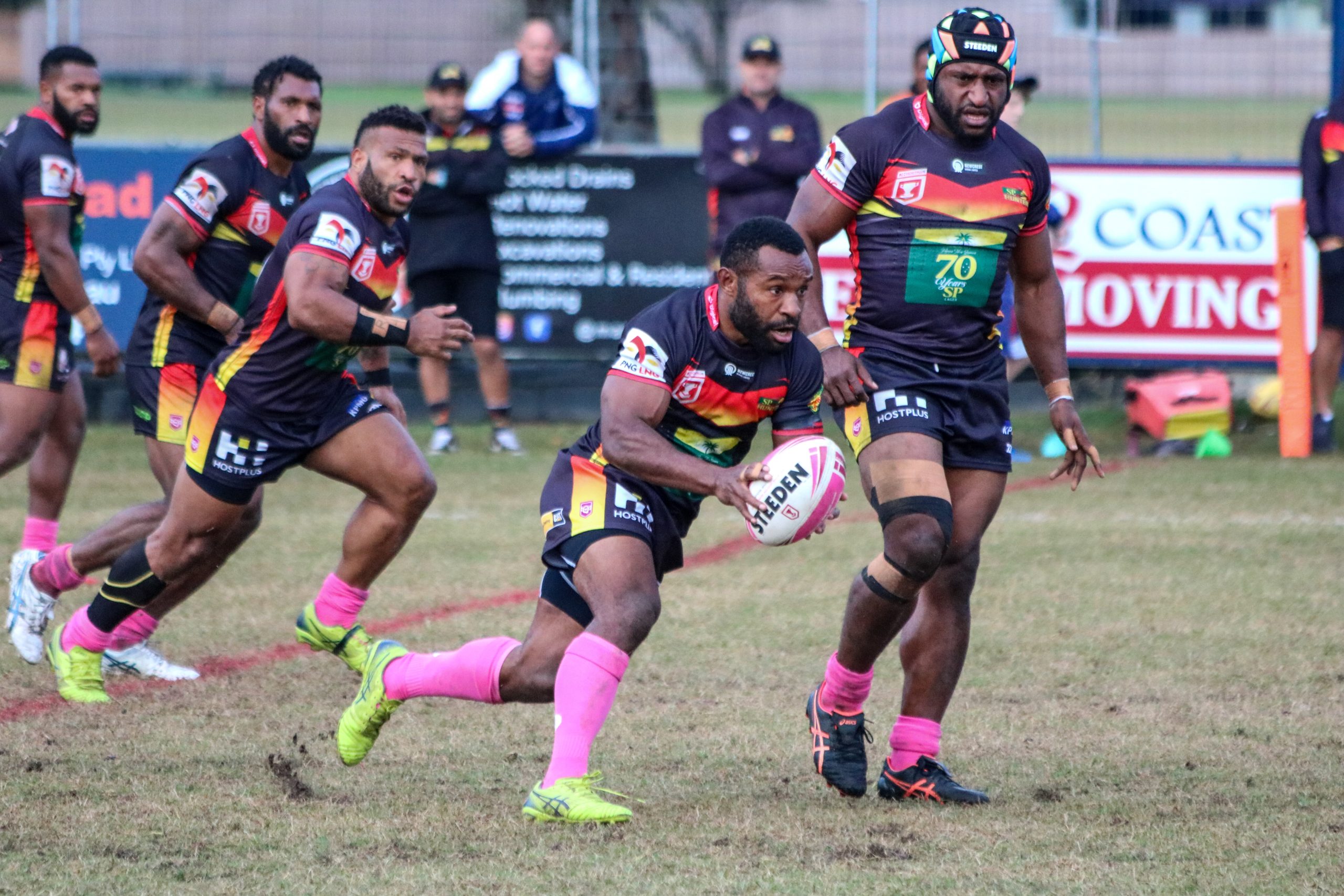 By Oscar PannifexAugust 13, 2022No Comments

The SP PNG Hunters and Townsville Blackhawks have fought out a highly entertaining wet weather contest in Round 18 of the QRL Hostplus Cup, with both sides settling for a 23-23 draw at Bycroft Oval, Runaway Bay.

It was the visitors who would adapt quickest to the dreary conditions, getting through their opening sets and slowly winning the territory battle thanks to their fifth tackle options and the Hunters’ own ill-discipline.

The Blackhawks persisted with shifting it right through Robert Lui in good ball but the Hunters defence held up to repeatedly turn them away in the opening stages. It was only a clever short pass from dummy-half on the Hunters’ line that would eventually crack the home side when Kulikefu Finefeuiaki crashed over 10 minutes into the contest.

Townsville would go back-to-back when Tom Chester crossed not long afterwards, latching onto a pinpoint attacking kick that came down right next to the posts. Hunters and Blackhawks players both went up for the ball but it was Chester who came down with it, crashing into the uprights and bouncing to the ground to score.

The Hunters would answer back quickly, marching upfield on the back of a Blackhawks penalty and into position for their first shot at Townsville’s line. A slick left side shift ended with centre Benji Kot who punished the sliding defence with a big left foot step to score PNG’s first points.

Townsville’s lead was quickly restored to 10 when Chester crossed for his second just minutes later. A clever shift late in the count caught out the Hunters’ edge defence who had dropped back for the kick, and Chester was the beneficiary with some nice support play netting him an early double.

Desperate to drag themselves back into the game, some kick pressure applied by the Hunters earned some much needed attacking field position shortly afterwards and they built on that pressure when Judah Rimbu smartly forced a drop-out with his left boot. The visitors would defend their line convincingly though, holding up Keven Appo in the in-goal and then forcing an error on the last with their line speed.

The Hunters would not be denied for long though. Embracing the grind and improving their discipline, the PNG side clawed their way back upfield to earn themselves another shot at Townsville’s line and this time they made it pay.

A long shift to the left through Rimbu and Kitron Laka again found Benji Kot in some space and again he took his opportunity. Sizing up his opposite man, Kot put on some footwork to draw in the opposing winger before a superb offload found Solo Wane untouched in the corner.

As a result the Blackhawks would take a 16-12 lead into the break.

Both sides came out with intent in the second half but it was the smarts and execution of the Hunters that lead to next points points.

An excellent yardage kick from Kingstimer Paraia pinned the Blackhawks in their own corner and the defensive pressure PNG applied quickly forced an error.

With their next possession, the Hunters compressed the middle thanks to Wesser Tenza’s work from dummy-half before setting up for another shift to the left. Strike centre Kot again appeared to be the target but Rimbu played with nice variation to drop Laka back underneath, who crashed through the defence to score.

Not to be undone by his halves partner, Rimbu was the next Hunter to set things up with his boot when he launched a spiralling bomb skyward and then lead the chase to tackle Townsville in their own in-goal and earn a repeat set.

Riding the momentum and having found a winning formula, the Hunters again searched left in good ball with a smooth backline shift this time that ended with Kot sliding over for his second.

As the game settled into a grind the points dried up and field position became key.

The Hunters and Blackhawks both traded sets and kicked to corners with neither side looking like breaking until a penalty awarded Townsville a fresh set on PNG’s line.

The visitors searched left with some nice shape through five-eighth Jake Burke and Chester that threatened to break the line, only for some desperate cover defence to drag the Blackhawks fullback down. The damage had been done to PNG’s defensive system though and Jaymon Moore capitalised on this to crash over from dummy-half on the very next tackle.

With the scores locked at 22-22, the stakes were high as the game entered the final ten minutes.

Both sides scrapped and fought for yardage as the clock wound down and with less than three minutes left it was Townsville five-eighth Jake Bourke who found himself in position for a shot at field goal.

Bourke hit it sweetly to give Townsville the lead but the visitors’ celebrations were short lived when Hunters’ five-eighth Kingstimer Paraia responded in PNG’s very next set, slotting an attempt from right in front to tie things up as the siren sounded.

The draw result is a positive one for the Hunters who impressed with their intent and execution in key moments, while the Blackhawks while bemoan a chance to threaten the top eight and push for a finals appearance.

Head Coach Matt Church was delighted with his side’s response after a disappointing showing against the Sunshine Coast.

“It was really pleasing to see us respond after last week and improve in key areas,” said Church.

“Our kicking game was much better today and it allowed us to build pressure and create scoring opportunities.”

Church also paid tribute to the Hunters’ resilience and execution under pressure.

“To execute that set at the end there and draw the game with our only attempt was really pleasing,” said Church.

“Although we haven’t been as consistent as we’d like this season, that field goal is a good example of how far we’ve come as a playing group this year. If we stick to our systems and execute our game plans, we can compete with anyone on our day.”