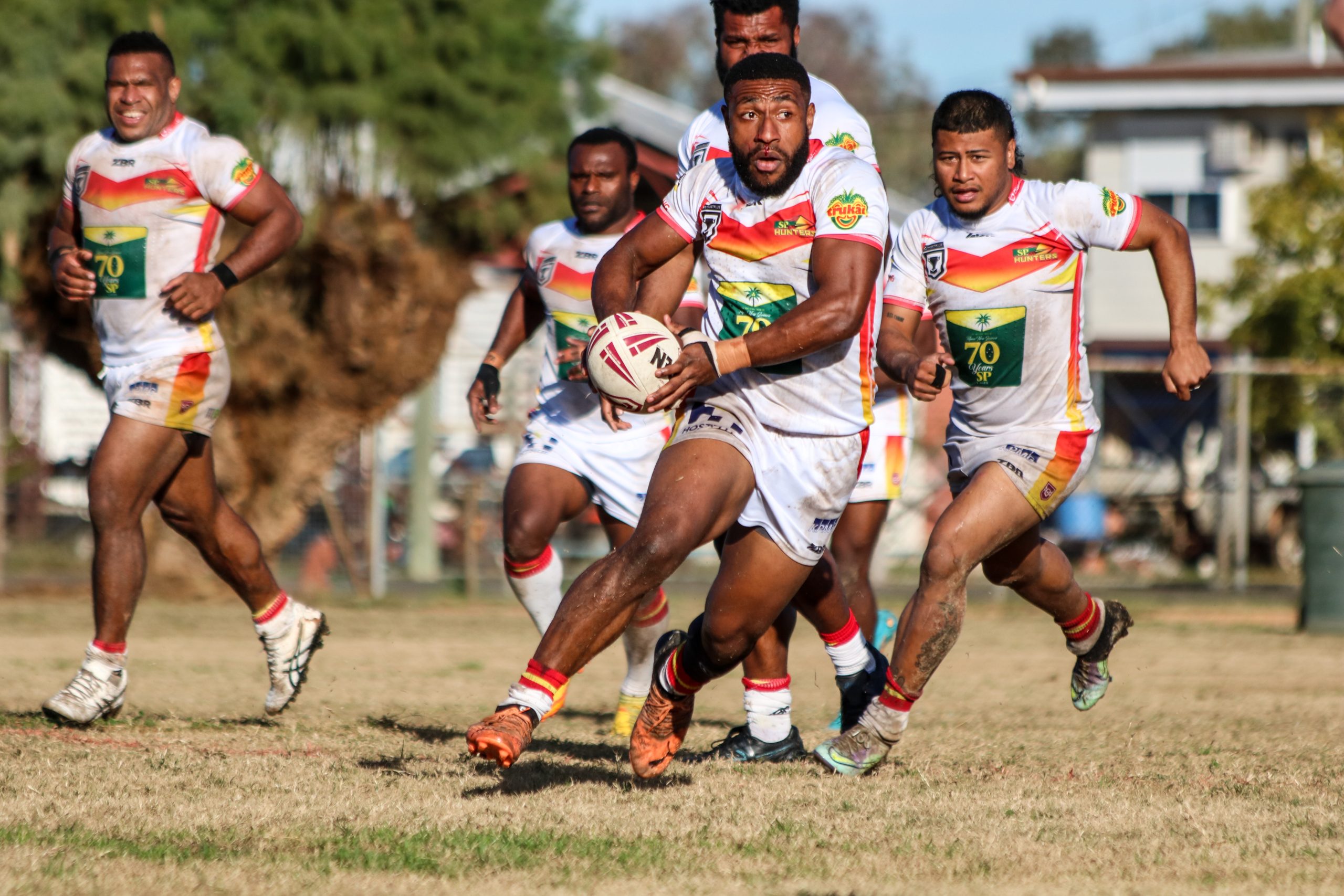 By Oscar PannifexJuly 23, 2022No Comments

The SP PNG Hunters have produced an inspiring come-from-behind 32-24 win over the Brisbane Tigers in Round 16 of the QRL Hostplus Cup.

John Kerr Park played host to the game as part of the QRL’s Country Round initiative and the Cunnamulla locals were treated to a high-scoring and fiery contest on Saturday afternoon, with the Hunters finding themselves down 14-0 at one stage only to fight back and claim their fifth win of the season.

Early penalties conceded by both sides presented scoring opportunities in the opening sets and it was the Tigers who first turned those chances into points.

Setting up camp on the Hunters’ line, the Tigers sent one attacking raid down their right edge which the Hunters repelled before setting up at the posts for another crack. Again searching to the right, the Tigers’ shape beat PNG’s rushing defence on the second attempt and towering centre Dan Russel was the beneficiary in the corner.

The Hunters responded convincingly by forcing an error with their defence in the kick off set and then surging upfield themselves through prop partners Sylvester Namo and debutant Francis Kembis.

A deft fifth tackle kick from fullback Tyler Han then pinned Brisbane on their own line but an offside penalty on the following play gifted the Tigers free passage upfield and Jayden Nikorima made them pay. Targeting the space around the ruck, some fancy footwork from Nikorima broke the line to link with Haele Finau in support, giving Brisbane a 10-point lead.

Another smart attacking kick from the Hunters in good ball – this time Wartovo Puara – quickly swung the momentum back in PNG’s favour.

Puara’s grubber looked too heavy off the boot but found a puddle of water in the in-goal to sit up perfectly and force a line drop out. In the ensuing set, 50 Cup game milestone man Brandon Nima almost collected another attacking grubber but his timing was out by the smallest of margins to be called back for offside.

Taking a leaf out of the Hunters’ book, the Tigers put boot to ball in their very next set. The class of Nikorima was again the difference, landing a bomb right on the Hunters’ line which ricocheted to find an unmarked Bennett Leslie a few metres out.

Facing a 14-0 deficit midway through the first half, the Hunters suddenly came to life. Bench forward Emmanuel Waine made an immediate impact to generate some ruckspeed with his first carry, and two more quick play-the-balls later Puara went from half and linked with Han in the backfield who slid over beneath the posts to score.

With halftime approaching, ill-discipline was proving the key difference between the two sides as the Hunters continued giving Brisbane free passage out their own end. Bessie Toomaga was the next Tiger to turn that gifted field position into points, producing a special diving effort in the right-hand corner to score in the 28thminute.

The Hunters would answer right back however, with Judah Rimbu sweeping down PNG’s left edge and dropping a charging Kitron Laka back against the grain. Taking possession 20 metres out from Brisbane’s line, Laka pushed through four attempted tacklers to dive over beside the right post and bring the scores to 18-12 at the break.

A far more disciplined Hunters outfit took the field in the second half and immediately earned themselves a shot at Brisbane’s line when Rimbu forced a drop out with a delicate short kick. Five tackles later and bench hooker Kingstimer Paraia produced a trademark burrowing effort close to the line to score.

Paraia was at it again just four minutes later, darting from hooker and passing Laka into half a space beside the ruck when attacking Brisbane’s line. The Tigers’ markers couldn’t react in time as the powerful backrower drove low to give PNG the lead for the first time in the match.

The Tigers had no answer for Paraia around the ruck as he orchestrated yet another Hunters’ try for Jordan Pat in the 56th minute.

Again the points came on the back of PNG’s improved discipline and the boot of Rimbu, who forced his second line drop-out of the match to give PNG another shot at Brisbane’s line. Paraia would make that shot just three tackles later, scooting from half to engage the markers before offloading back inside for Pat to score beside the posts.

A rare error off the boot of Rimbu then saw a yardage kick go out on the full and give Brisbane their first chance of the second half. The Tigers promptly took it through Bernard Gregorius who finished a nice left edge movement in the 61st minute, diving in the corner to narrow PNG’s lead to just four points when Jonah Pezet added the extras.

Those four points quickly became eight however when Hunters’ debutant Liam Joseph finished a slick four pass shift to the right edge. Han played a leading role in Joseph’s maiden try, with the Hunters’ fullback popping up on the left edge one tackle earlier and then creating the overlap on the right for his winger to score on the following play.

Joseph’s try sealed the result for the Hunters, who repelled a desperate Tigers outfit in the dying stages to finish off an inspiring comeback win.

Head Coach Matt Church was delighted with his players’ response after conceding an early lead.

“That was a really brave effort from us today,” said Church.

“I’m really proud of the way the players responded. We just gave them too many leg ups in the first half so we spoke about getting through our sets and stopping all the penalties and we did that in the second half.”

Church also paid tribute to Liam Joseph and Francis Kembis who made their club debuts in winning fashion.

“Both our debutants were huge for us today and I’m really pleased for them,” said Church.

“Liam’s positioning was excellent and obviously a great reward to get that try, and Francis played 67 minutes straight for us in the middle in his first game at this level – that’s a huge effort.”