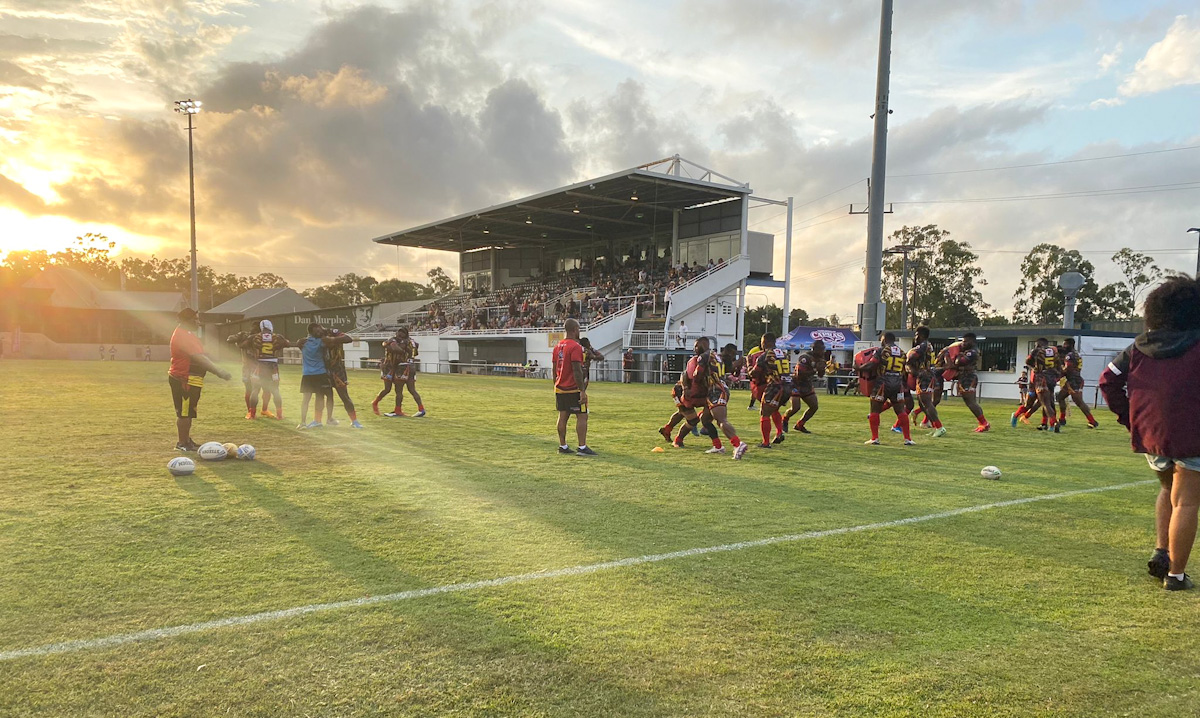 By Oscar PannifexMarch 7, 2022No Comments

The SP PNG Hunters had their first hit out of 2022 against the CQ Capras in a trial match over the weekend. The Hunters used a 21 man squad for Saturday night’s game as they look to confirm team selections and build on combinations ahead of the Hostplus Cup regular season.

The Hunters were tested from the opening set when lock-forward and captain Ila Alu left the field with a shoulder injury and forced the Hunters into a reshuffle. They entered the sheds down 10-0 at halftime but there were positives to come with the Hunters matching their opponents in the second half to finish the game 20-10.

Given the cancellation of the Melanesian Bowl trial against Fiji a week earlier, this was the Hunters’ first game since September last year and their first real test of 2022. SP PNG Hunters’ assistant coach Stanley Tepend said it was an important learning experience for the side.

“This was probably a game we needed to have,” Tepend said.

“The boys haven’t played for six months now and it showed in our completion rate and our discipline. Credit to the Capras who competed well and made us fight for everything, but we know we have plenty of improvement in us.”

The Hunters have 13 returning players in their 26-man squad this year while another 13 new faces join the group. There’s a nice balance of youth and experience but there are always growing pains associated with this kind of roster turnover and Tepend is confident the combinations will come.

“The most important part of Saturday’s trial was building combinations across the park. In both attack and defence it was clear the boys were learning to play alongside each other and that only comes from game-time and repetition. We’ll be better for the hit out,” Tepend said.

In typical Papua New Guinea fashion, the Hunters played an aggressive and energetic style of footy on both sides of the ball. A grueling pre-season regime has the players in great physical condition for the season ahead but handling errors and poor decision making cruelled their chances of a second half comeback against the Capras.

The Hunters didn’t hold the ball consistently enough in attack to earn themselves many genuine scoring opportunities. The spine in particular has a number of new faces in Wesa Tensa (hooker), Mark Tony (halves) and Kingstimer Paraia (utility) who will all be better for the run, while Digicel Cup premiership winning halfback Jamie Mavoko missed the game through injury.

In defence, the Hunters’ first contact was characteristically strong but from a coaching perspective there were too many individual efforts without the ball. A focus on communication and working as a unit over the coming weeks should see the Hunters’ defensive systems improve markedly.

Sylvester Namo, Samuel Yegip, Dilbert Isaac and Rodrick Tai were notable mentions in the Hunters’ first hit out of 2022. The SP PNG Hunters will return to the training paddock this week before taking on the West Brisbane Panthers in a final trial game this Saturday, 12th of March at 5:30pm.