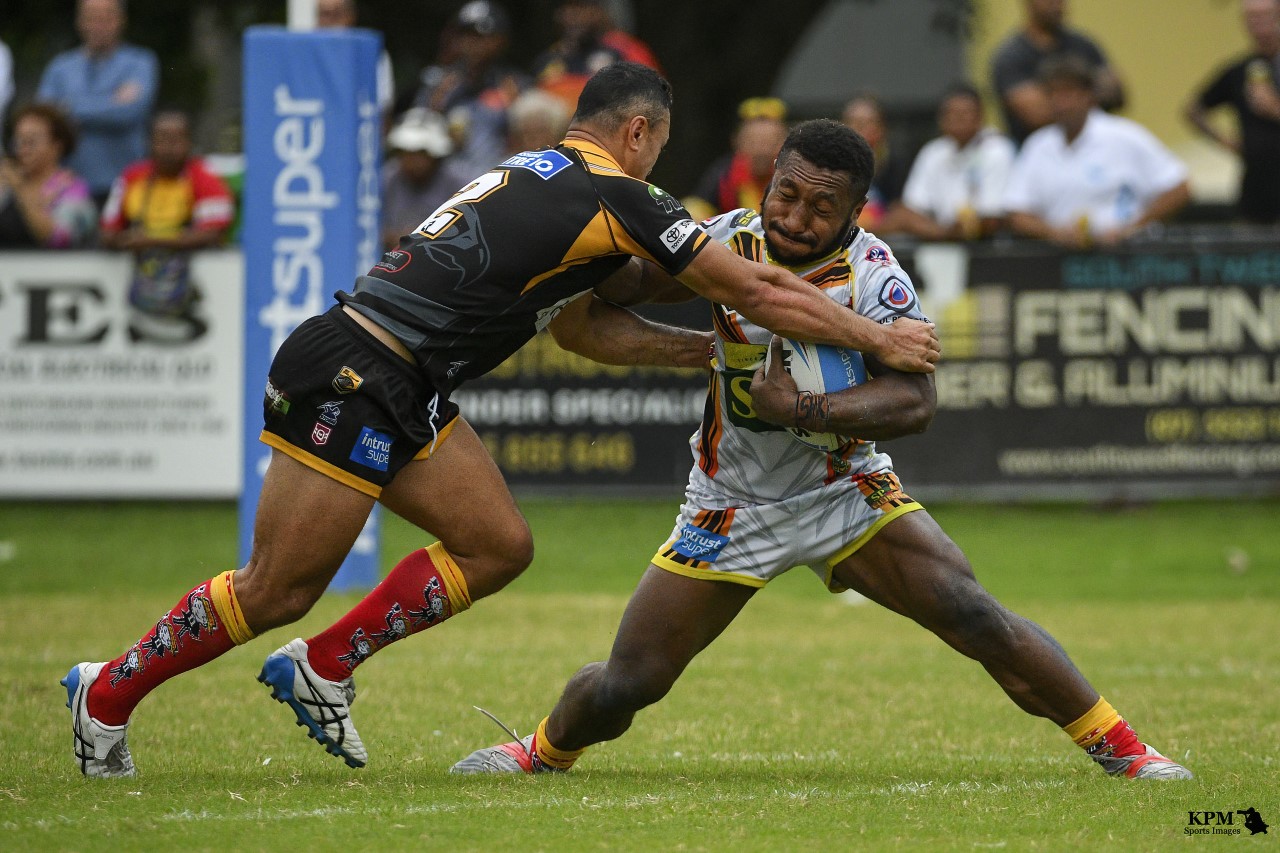 Jokadi Bire gives thanks during recovery

Jokadi Bire is approaching the next stage of his young life with the same dedication, commitment and positive thinking that drove him from a tiny PNG town into the heart of the SP PNG Hunters.

Jokadi is plotting a new future and giving thanks for his remarkable escape from a heart condition that almost took his life in June. He has been told that he can now expect to live a full life.

But the 22-year-old is coming to terms with the fact that he can never play rugby league again, a reality he admits has been difficult to accept just weeks after his career was blossoming.

The dynamic Hunters centre has spoken publicly for the first time about his health scare on a winter’s morning at the team’s training base at Runaway Bay at the northern end of the Gold Coast.

It was just three days after Jokadi’s rugby league star continued to rise with his speed and strength delivering a superb individual try against competition leaders Norths Devils.

As highlights of that try bounced around the Intrust Super Cup social media feeds, Jokadi began feeling unwell at a Hunters gym session on June 15.

“I woke up OK as usual and I didn’t feel anything strange,” Jokadi said.

The Hunters called paramedics who arrived at the gym and quickly diagnosed symptoms of a stroke.

Jokadi was taken to Gold Coast University Hospital and underwent brain scans as specialists tried to understand the extent of the illness. But the scans showed up more than the specialists expected – the bottom of the scan gave a glimpse of the top of Jokadi’s heart and doctors knew they had to act fast.

The stroke had been caused by a tear in Jokadi’s aorta, which meant his life was beginning to ebb away.

He was rushed into surgery for a nine-hour operation that would save his life. Jokadi’s aortic valve was replaced with a mechanical valve.

But that was only a part of the journey.

Jokadi was placed in a coma for three days after the surgery as doctors monitored his progress. He spent a week in the hospital’s intensive care unit before being moved to the cardiac ward for two weeks.

During that time, Jokadi had two teammates who hardly left his side – Dilbert Isaac and Edwin Ipape.

They were familiar faces for Jokadi when he regained consciousness and began to understand his condition. And they helped translate for him as the stroke impaired Jokadi’s speech and memory.

Jokadi would spend another two weeks in the hospital’s neuro rehabilitation ward before he was cleared to rejoin his Hunters’ teammates. The return to the training base was a significant step for Jokadi.

“Thank you Lord for giving me a second chance,” Jokadi said.

“And thank you Lord for everything that has ever happened to me.

“Rugby league allowed me to come here – right next to the hospital. If I had not been here, the outcome might not have been the same for me.

“It was a very quick time from feeling sick to getting operated on. The team at the Gold Coast University Hospital were incredible. They saved me. I know some patients have died in hospital with this condition. Lucky for me. Thank you to all the staff. I can’t thank them enough.”

While Jokadi will be forever grateful for the medical staff, there was one recommendation that has taken some time to accept – his heart surgery and the effects of the stroke prompted doctors to tell him that his rugby league career was over. He will require medication for the rest of his life.

“Being a kid from the settlement, it was my dream to play professional rugby league. But unfortunately my career is shortened due to the illness,” Jokadi said.

“When I heard the result from the doctors that I cannot play, I didn’t accept it at first.

“It’s difficult. Most of my fans were expecting me to play again. That hurts because I wanted to play well for them. I know there are other small kids like me who want to play also.

“My family is very heartbroken as well. We have grown up in a poor settlement and every day we are striving for success.”

Jokadi was raised in Kundiawa but his people are from nearby Salt Nomane, Chimbu. Jokadi was proudly the first person from Salt Nomane to play for the Hunters.

As Jokadi began to recover in hospital, he stayed in contact with his brother Shalom, who plays for the Port Moresby Vipers in the Digicel Cup. Shalom was able to relay news of

Jokadi’s condition to family and friends as they prayed for his recovery.

Jokadi is continuing to improve at the Hunters’ training base at Runaway Bay, making progress each day. He intends to remain involved with a rugby league community in the years ahead.

And he expects to complete further study. He will return to PNG with the squad at the completion of the season, when he will graduate from the PNG University of Technology with a degree in electrical engineering.

That’s another factor that Jokadi has in common with Melbourne Storm star Justin Olam.

They hail from the same part of PNG, they studied at the University of Technology and they had an explosive style of football as powerful centres.

Olam left the Storm’s NRL camp to visit Jokadi in hospital, bringing gifts and well-wishes from one of the most dominant players in PNG’s modern rugby league history.

“That meant a lot to me that Justin came to the hospital,” Jokadi said.

“We have some things in common so I was grateful that he took time to visit me.”

Jokadi has followed Olam in many steps in life but he understands now that he won’t get the chance to take the step into the NRL.

Scouts had been taking interest in Jokadi’s progress with the Hunters and he was on the path to emulate Olam’s step from the Hunters to the NRL.

Now, he will refocus his energies on his next stage in life, knowing that he can expect to live a long life with the help of medication.

“I have much to be grateful for including the support of my family, my teammates and the many people who sent me messages of support. That meant a lot to me.