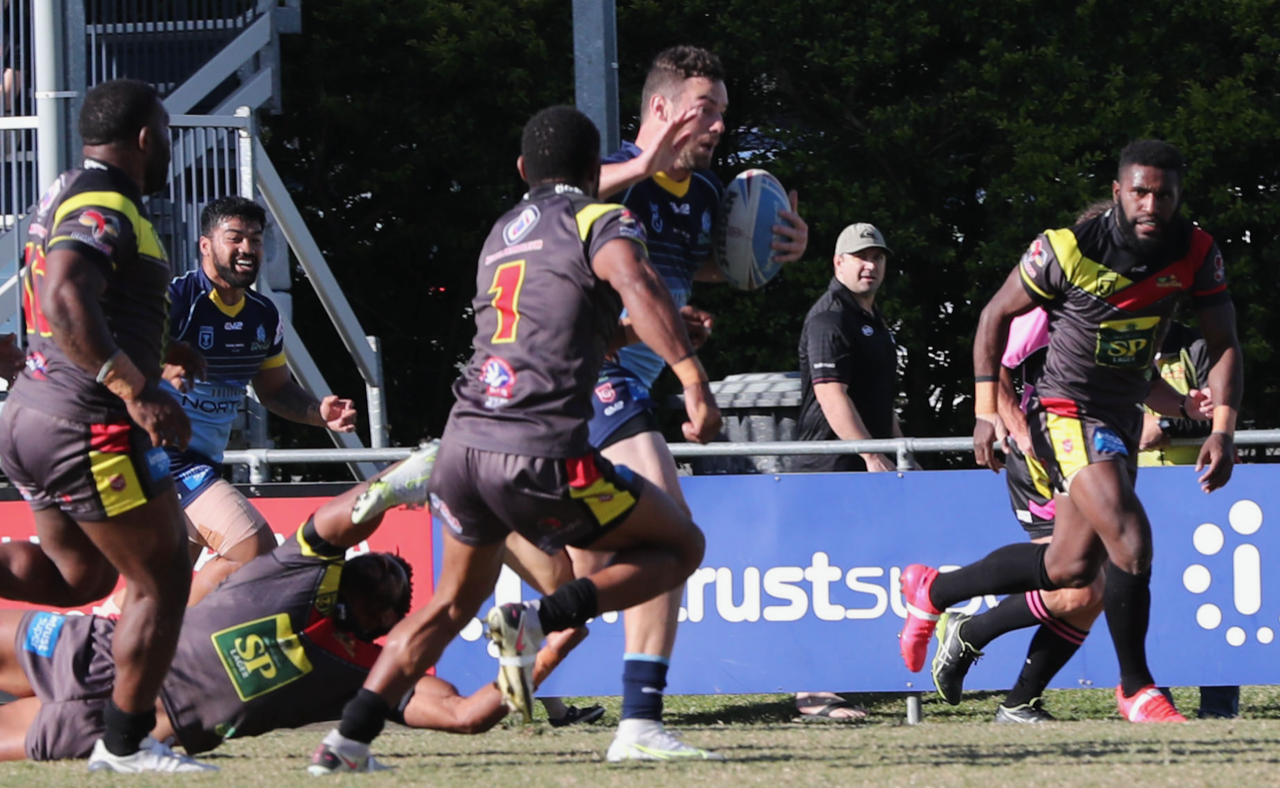 Hunters test Devils as first half of season ends

Home » Hunters test Devils as first half of season ends

The PNG Hunters reached halfway of the Intrust Super Cup season knowing they can mount a run to the finals after testing the high-flying Norths Devils at Bishop Park.

The final 38-22 scoreline didn’t reflect the stern test that the Hunters handed out to the second-placed Devils, who led by only four points approaching the final 20 minutes of the match.

A spark from Brandon Nima, who fielded a Devils kick in his in-goal in the 11th minute, ignited the Hunters’ early run today. Nima passed in the in-goal to winger Solo Wane, who raced the length of the field for the Hunters’ first points of the day.

They fell behind 20-6 after 28 minutes as the Devils flexed their muscle with Broncos NRL heavyweights Ethan Bullemor, Jordan Riki and Danny Levi joining captain Jack Ahearn in an early attacking blitz.

But the Hunters answered when Riki was sin-binned with seven minutes remaining in the first half as Benji Kot (33rd minute) and Jokadi Bire (38th minute) crossed to send the Hunters to halftime trailing 20-16.

The scoreline remained that way until the 58th minute when the Devils crossed, ending a period of resilience that will serve the Hunters well as they move into the second half of the season.

“We always knew that the second half of our season would be better than the first given the challenges we’ve had with relocating from Papua New Guinea to Runaway Bay this season,” coach Matt Church said.

“That’s never been an excuse for us, it’s just been the acknowledgment that this is an unusual set of circumstances and we’ve always played hard.

“We showed some really bright patches today. That game was a genuine contest against a team that has some NRL players. We don’t have NRL players in our squad but we have a group of guys who have been learning every day this year.

“They’re learning a lot about their football and they’re displaying that against some of the best teams in the competition. We’re making progress.

“Anyone who watches PNG rugby league knows that the players like to back themselves and that’s what they do in every game.”

The Hunters had to dig deep after hard-working captain Ila Alu succumbed to a head knock and was ruled out of the second half.

They kept pressing the Devils and were rewarded with a 79th minute try to Keven Appo, bringing the scoreline closer to an indication of how the game flowed.

Both teams lost players to the sin bin and the opposition scored two tries while the man was off the field. The Hunters’ turn came in the 69th minute when Kot was sinbinned for a high tackle as he tried to stop a stepping Jon Reuben from scoring for the Devils.

The Hunters have one more match before the mid-season bye, heading to the Gold Coast’s CBUS Super Stadium next Sunday to take on the Burleigh Bears. The teams had a memorable Anzac Day encounter earlier this year.