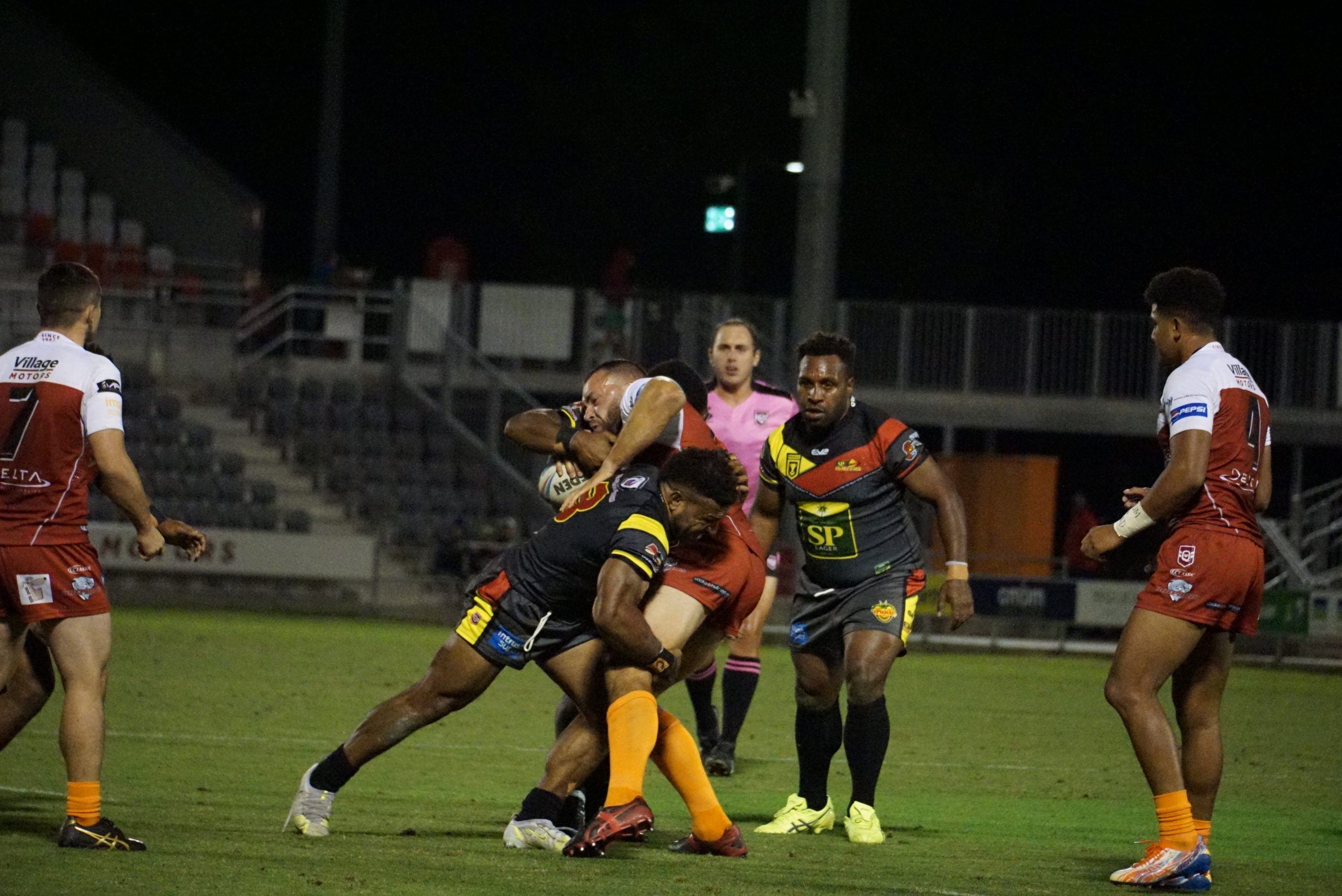 SP PNG Hunters showcased the danger they present to their Intrust Super Cup rivals in a fighting loss to the Redcliffe Dolphins at Moreton Daily Stadium tonight.

The Dolphins took advantage of a fast start to win 24-12, unloading four tries in the first 27 minutes before the Hunters clicked into gear with three tries of their own.

After two frustrating losses, coach Matt Church wanted his players to show the consistency that had stamped the Hunters as top-four contenders in the first month of the season.

He got that wish after the slow start as the Hunters held the Dolphins scoreless for the last 53 minutes on a ground that has become one of the toughest for visiting Intrust Super Cup teams.

Junior Rau finished off a slick set move in the 36th minute that sparked the Hunters’ fightback.

Forward Benji Kot scored in the 65th minute and Rau crossed again in the 70th minute but wayward goalkicking against the perfect boot of Dolphins’ NRL playmaker Sean O’Sullivan prevented the visitors from bridging the gap.

“We set ourselves a task tonight with that slow start and we paid the price for not being able to build pressure,” Church said.

“They’re a big team and they tried to muscle up on us. We knew they would do that and we had to compete. We’d had a disjointed preparation but that’s how this year is.

“But we kept things positive at halftime and said that we were looking to compete to the end. This was a chance for us to show that consistency and we finished strongly.

“We showed a lot of energy and that was important for us. We always said that we would finish this season stronger than we start it and we’re still working towards our best football.”

The Hunters had struggled in their last two matches with injuries and suspension leaving them with only 17 and 18 players to choose from.

They welcomed back some experience tonight in front of another large and vocal group of Hunters fans.

But the task was always going to be tough against a Dolphins team that had won 10 of its last 11 home matches.

The Hunters finished with an injury concern to Epel Kapinias, who aggravated an ankle problem that had disrupted his early part of the season. He left the field with three minutes to play.

The Dolphins finished with 12 men after Tyson Cleal was sent off for a shoulder charge in the 67th minute, colliding with Hunters prop Samuel Yegip from the re-start from Kot’s try.

That sparked the Hunters’ hopes of a fairytale comeback on the ground where they won their historic first match in the Intrust Super Cup seven years ago.

But the Dolphins had established too much advantage through tries to Jeremy Hawkins (11th), Lachlan Timm (16th) and captain Cameron Cullen (22nd minute).

When Viliami Vailea crossed in the 27th minute, the Dolphins had a huge head-start as they attempted to maintain their place in the top eight. O’Sullivan, continuing his role with the Dolphins while he remains part of the New Zealand Warriors squad, delivered four crucial conversions.

The Hunters could be pleased with the performance of a spine that featured Edwin Ipape at five-eighth. The Hunters return to their Runaway Bay base next week to take on the Townsville Blackhawks while the Dolphins travel to the Sunshine Coast to play the Falcons.