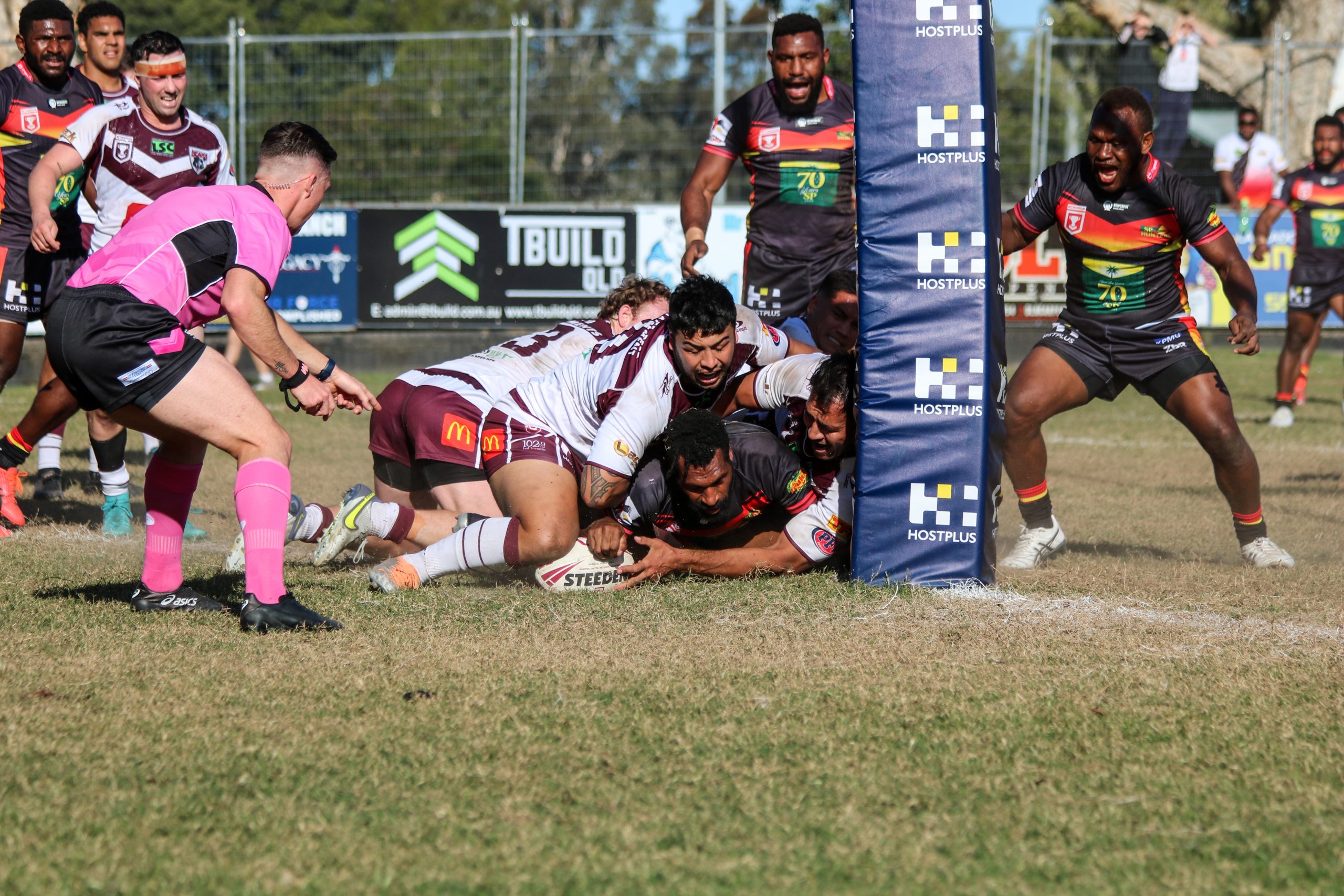 By Oscar PannifexAugust 20, 2022No Comments

The SP PNG Hunters took to Bycroft Oval, Runaway Bay for the final time this year on Saturday, 20th August ahead of their return to Papua New Guinea next week. With a host of supporters in attendance to finally farewell the Hunters from the Gold Coast, the PNG side produced a stunning 32-24 win over competition heavyweights Burleigh Bears in Round 19 of the QRL Hostplus Cup.

The occasion seemed to bring the best out of the Hunters who started strongly and maintained their dominance right through until the final stages to notch an emotional victory at their home-away-from-home in Runaway Bay.

The Hunters defended their errors strongly to begin the game, pressuring Bears’ winger Tony Francis into dropping the ball in Burleigh’s first attacking movement and then cleaning up a dangerous Guy Hamilton grubber shortly afterwards.

The confidence with which PNG defended their line then quickly translated into their efforts with the ball. A clever chip kick from Kingstimer Paraia from inside his own half forced an error from the Bears and fullback Tyler Han was in perfect position to punish the mistake, plucking the loose ball out of the air and running in PNG’s first try in the 6th minute.

Hunters prop Francis Kembis was next to get in on the action when he scored beside the right upright in the 13th minute. Some lovely deception from hooker Wartovo Puara fooled the ruck defence and pitched Kembis into half a gap on Burleigh’s tryline and the powerful front rower would not be denied from there.

The Hunters were almost in again in the 30th minute when a smart left edge shift through Judah Rimbu and Han created the space for Han to drop a grubber kick into the in goal. PNG centre Benji Kot won the race to the ball but the Hunters were called back for an obstruction in the lead up.

The Bears managed to slow PNG’s momentum as the game settled into a grind but didn’t look like threatening to score as the Hunters’ dominated proceedings to take a 12-0 lead into the break.

Both sides came out firing in the second half but again it was the PNG side who would quickly gain ascendency, winning the ruck with their power game through the middle and kicking effectively thanks to Rimbu and Paraia in the halves.

Eventually the Hunters’ possession and field position would translate into points when Benji Kot scored seven minutes into the second stanza.

In what’s become a pet play for the Hunters this season, Rimbu took possession down the left edge and drifted outwards before dropping his backrower underneath. It’s usually an action we’ve seen Kitron Laka execute with great success in 2022 but this time it was vice-captain Keven Appo charging onto Rimbu’s pass to break the line and find Kot in support.

The linebreaks kept coming for the Hunters when Wesser Tenza orchestrated a short side raid as PNG were working out their own end soon after. Tenza used his vision and guile from dummy-half to send Paraia at the retreating edge defence and Paraia summed things up smartly to tip Sherwin Tanabi into a hole off his hip. Tanabi’s run broke the Bears’ line before he found Tenza in support back on his inside.

Rimbu was next to score for the Hunters as the clock wound down and the scoreboard kept ticking over. Interchange forward Jordan Pat was the instigator this time with a late offload in front of the posts landing in the hands of Puara, who then drew in two more Burleigh defenders with a swerving run before passing Rimbu into space on the left edge to score.

The Bears were finally afforded the chance to build some pressure when they earned consecutive sets on PNG’s line late in the second half. Burleigh winger Tony Francis would capitalise on this in the 67th minute to finish off a smooth right edge movement by the visitors.

Finding their second win late in the piece, Burleigh would then score back-to-back tries when Alofiana Khan-Periera crossed in the 71st. The Hostplus Cup’s leading tryscorer showcased his trademark speed to burn the Hunters’ defence in a 60+ metre effort that took the Bears to 12 points.

Two more late consolation tries to Burleigh helped add some respect to the final score when Francis crossed for his second at the 67 minute mark and Josiah Afu scored in the final seconds.

The end result was all about the Hunters though, who capped off a exhausting two-and-a-half year relocation period with a stunning win over the competition leaders.

Head Coach Matt Church was delighted with the result.

“I’m just really pleased that we get to finish our time here on a high,” said Church.

“Relocating to the Gold Coast has been an incredibly challenging period for the club and I’m really proud of the boys efforts today against a quality side.”

“Our kicking game was much improved, we completed well and we stuck to the gameplan – things we have been working hard at all season. It’s rewarding to see the fruits of that labour today.”