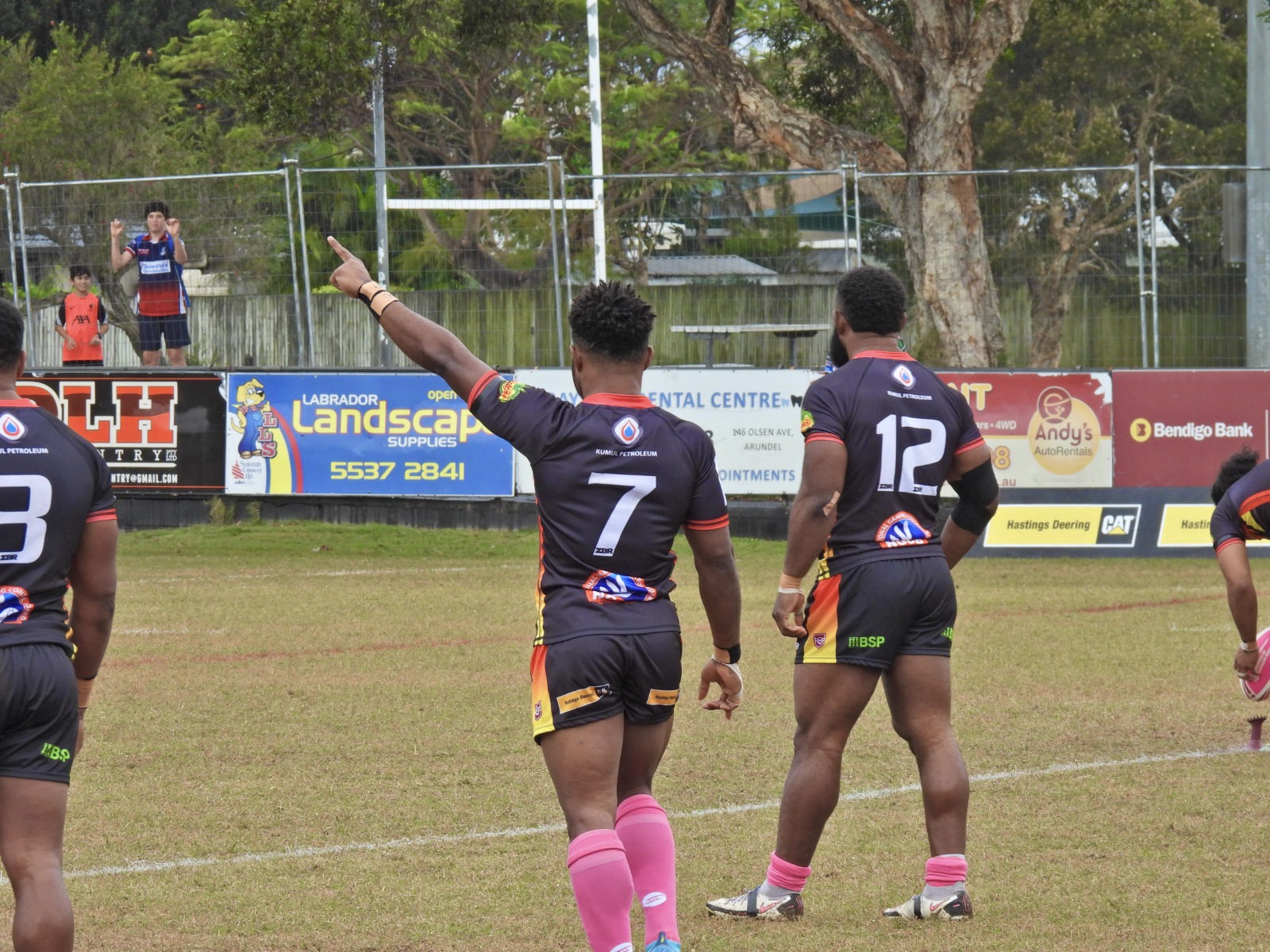 By Oscar PannifexAugust 18, 2022No Comments

The SP PNG Hunters are back at Bycroft Oval, Runaway Bay this Saturday 20th August at 3pm when they host the Burleigh Bears in Round 19 of the QRL Hostplus Cup.

This match is again potentially the last time the Hunters will play at their home-away-from-home on the Gold Coast in 2022, with plans to return to Papua New Guinea next week for the last game of the regular season still tentatively placed and pending approval from the QRL.

The Hunters come into Round 19 on the back of a nail-biting 23-23 draw with the Townsville Blackhawks last weekend and will take plenty of confidence from that result.

The PNG side embraced the underdog tags and forced Townsville into a grind in that game, with both sides locked up at 22 apiece with less than five minutes remaining. Blackhawks five-eighth Josh Bourke slotted a field goal in the dying stages to give his side a narrow lead that lasted less than a minute, as the Hunters marched upfield and in position for Kingstimer Paraia to nail his attempt and draw things up as the siren sounded.

The Hunters showed great improvements in their kicking game in Round 18, with Judah Rimbu and Paraia effectively using their boot to win field position for their team. From there, the PNG side showed their characteristic strength to batter the middle and compress the defence before shifting to their strike left edge. Charging backrower Kitron Laka – who has been one of the Hunters’ best in the backend of the season – crossed for one while left centre Benji Kot had three try involvements with an assist for Solo Wane and a double of his own.

If the Hunters can win the territory battle with their kicking game again this week, they will give themselves every chance against the competition leading Burleigh Bears on Saturday.

The high flying Bears have come back to earth in recent weeks, having drawn with Tweed in Round 17 before losing to the Mackay Cutters last Sunday. It’s a far cry from the seven-game win streak Burleigh posted midway through the season but a consistent 2022 campaign still sees the Bears comfortably in first position on the ladder with two games remaining.

Burleigh winger Alofiana Khan-Pereira also sits atop a leaderboard of his own, with 22 tries so far this season making him the most prolific try scorer in the competition. Khan-Pereira bagged another four last week in Burleigh’s loss to Mackay and poses a significant threat to the Hunters in Round 19 with his finishing abilities out wide.

As the season’s gone on and combinations have been allowed to develop, we’ve started to see the best of the Hunters on both sides of the ball. The experience gained throughout this season will have the Hunters in good stead for 2023, provided they can retain the bulk of their squad.

If the Hunters are afforded the chance to continue nurturing young talent with elite rugby league education and development, the PNG side will be well placed to begin working their way up the Hostplus Cup ladder.

A recent example of this is Hunters’ centre Benji Kot, who has been in inspired form since returning in Round 15 from a serious hamstring injury.

Kot has worked his way back from a potentially season-ending injury sustained against the Bears in Round 5 thanks to his own hard work and determination and the help of the Hunters’ high performance staff.

Kot reaped the benefits of the Hunters’ relocation to Runaway Bay, which has given him access to around-the-clock physiotherapy and rehabilitation treatment. Fourteen long weeks later and Kot is primed to make an impact in the Hunters’ revenge match with the Bears on Saturday.

Kot has been in damaging form since returning to Cup grade, running in two tries, one assist, four linebreaks, 12 tackle busts and an average 113 running metres in his first four games back. His combination with half Judah Rimbu and backrower Kitron Laka is another shining light for the Hunters in recent weeks, with the trio combining for four tries and five assists between them in the last month.

Laka’s hard line running is proving the perfect compliment for Rimbu’s ballplaying and Kot is providing the skill and finishing abilities on the edge.

It’s a combination that has taken time to develop but is a good example of the genuine development and improvement shown by the Hunters throughout a challenging 2022 campaign. With season’s end approaching, Kot and his left edge have two more games to impress and build on with an eye for 2023.

Head Coach Matt Church said he was pleased to see the improvements shown by his side last week but insists they will need to be better again against the Bears.

“We need to build on our kicking game from last week,” said Church.

“It was a vast improvement on the week before but it will be vitally important to competing against Burleigh this weekend.”

Church also paid tribute to some of his more senior players who are helping to maintain standards with the season coming to an end.

“Keven (Appo)’s return from suspension last week really boosted our squad, and Ila (Alu) has been playing consistently well since his return from injury,” said Church.

“Having those experienced players back out there again really makes a difference to our team.”

Church also gave credit to some of the Hunters younger players who have stepped up and impressed when needed this season.

“Liam (Joseph) came into the side last week for Rodrick Tai who was suspended for two games. Liam has done a decent job in his first two games as he continues to learn at this level.”